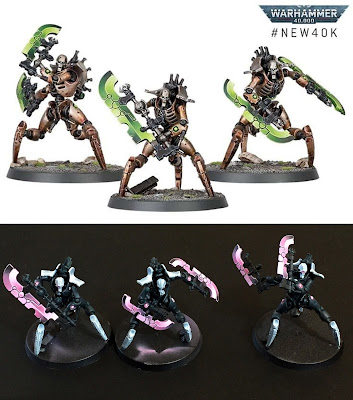 Welcome back to painting Necrons like Spindle drones from Blackstone Fortress.  It is also a speed painting project for my son and I to attempt during lockdown.  Well most of the painting is speed painting but airbrushing and particular masking off areas is definitely not speed painting, I think I spent more time masking off then I did painting the whole model lol :).

to recap the colours and technechques used on this 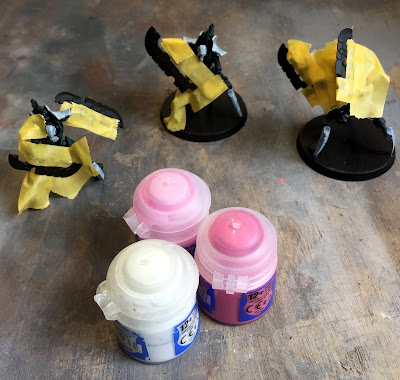 I wanted to airbrush the Hyperphase Thresers in exactly the same style as GW have done with the green on theirs but I would be using pink.  I didn't photograph the dry brushing stage because I wanted to conciontrate on this pink process, but first a lot masking off to do.  I masked off the model first. 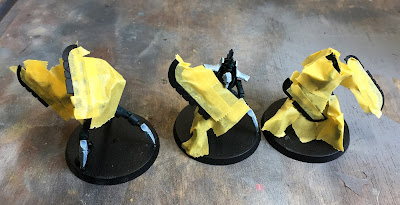 Then I masked off the inner blade. 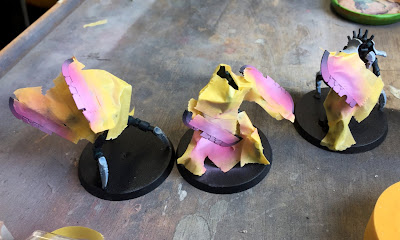 I added 3 layers of pink trying to get a smooth transition between each colour using the airbrush; Emperor's Children, Fulgrim Pink and white mixed with Fulgrim Pink.  A handy way to do this is after you have added all the colours sometimes one tone of colour can be lost, so its always a good idea to add that colour back in so all colours are apparent and blended together.  For instance on these the Emperor's Children colour was lost when I added to mush Fulgrim Pink so a qiuck carful add of Emperor's Children did the trick, 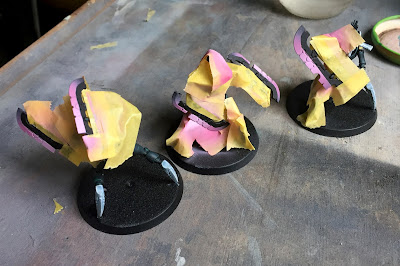 I then did the same process on the inner blade and masked off the outerblade.  It is also a good idea to make sure the paint is fully dry before adding masking tape otherwise you can pull off the paint with the masking tape. 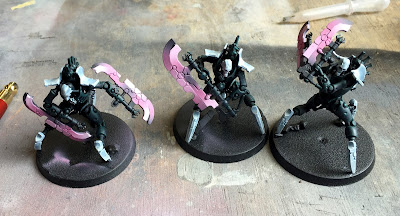 And there you go airbrushing complete, they will just need an edge highlight with Fulgrim Pink and black outlining.

I created based hacking and slashing parts from my bits box.  I want to continue the theme that the Emperium is rusting and decaying and the Necron although millions of years old they are pristine. 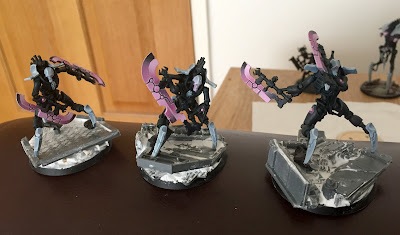 So there you have it I just need to paint the bases but I'll save it for next time when I'll be doing the Skorpekh Lord.

Posted by Bluewarp Studios at 10:06