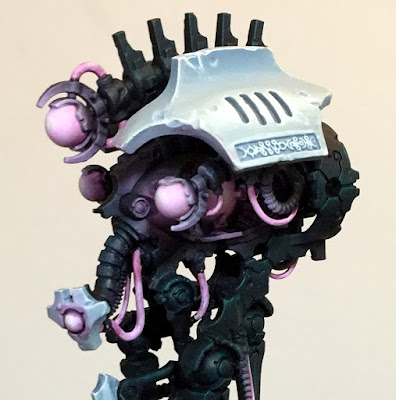 It has been a couple of days now since the Indomitus Box has dropped for us mere mortals and I thought I would share my progress and some confessions.

Like most people who play and collect 40K I just cant help myself from buying the new shiny shiny, and although when the Necron first came out I was tempted but I wasn't overwhelmed with the figures, how things can change.  I just could not resist in starting another new army, which is mad because I have so much on the go.

Confession time.... My son's Genestealer and Tyranid armies are almost complete and I am very behind with my blogging so a massive apology, but as his army is almost complete we needed another project for the summer holidays.  It was my sons idea to make this army together as a joint army, and I thought it was a great idea, I didn't need mush of an excuse anyway, the figures are amazing.

I have used the Canoptek Reanimator as a test model to see what our purposed colour scheme could look like, and I haven't stolen the colour scheme from Blackstone Fortress's Spindle Drone, honest! But first I had some converting to do, I just don't like the quadruped look of the model. it has too many legs, and also the Skorpekh Destroyers only have three legs.... and so do Spindle Drones lol. 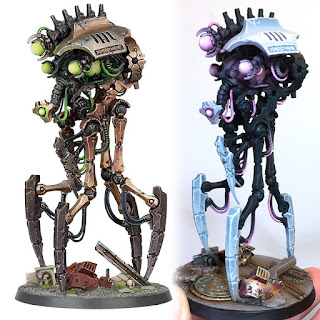 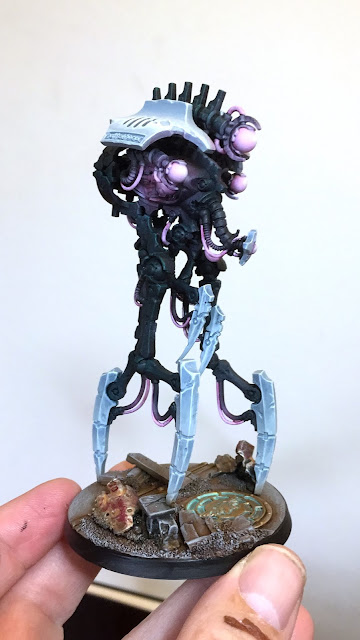 As it was a joint project it must be relatively easy and quick, with bits that my son could help with.  To start with the dark sections of the Canoptek Reanimator have been dry brushes with Incubi Darkness and a small edge highlight with Kabalite Green.  The white is wet blended with Fenrisian Grey, Celestra Grey and White Scar with an edge highlight with White Scar.  I didn't have to wet blend and I probably will not wet blend my Necron Warriors but I just wanted to see the full effect.  Finally I hand painted the pink with Fulgrim Pink, then gave a glow effect with the same colour with my airbrush and then used Contrast Magos purple to tone the pink down a little bit.  I then went back in with Fulgrim Pink with a paint brush.  I highlighted the orbs with the airbrush adding a little white to Fulgrim Pink.  From start to finish including the converting (not including drying times) it had taken me 4 hours not bad for me and as I am teaching my son how to airbrush and dry brush, there is nothing he can't do in this project. 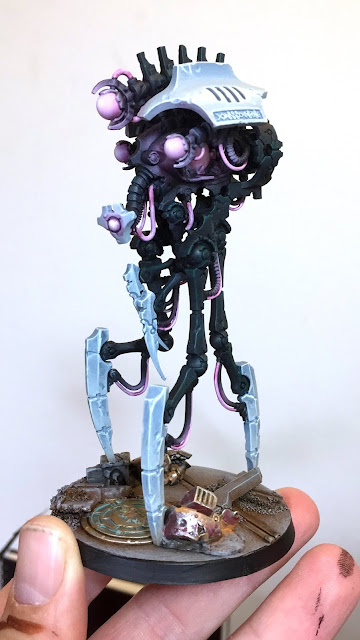 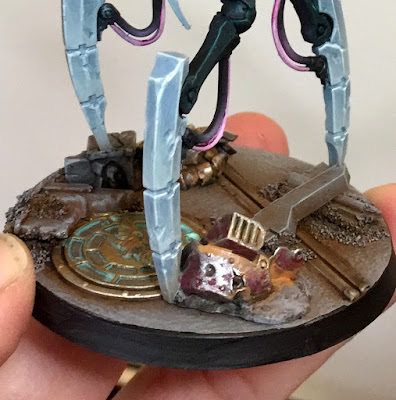 The final stage was the base, I used one of GW's pre sculpted 60mm basaes and added a little extra debris.  I added lots of browns and oranges for a little colour contrast to the all overall effect of the model.

I hope you like the effect, I know it is not the best painted model in the world, but that is not what I am going for, this is a speed painting project with a striking colour scheme that my son and I can do together.  Although I may have to convert all the new models into tripods, and why not tripods are cool :)

Posted by Bluewarp Studios at 10:41 5 comments:

Painting a Trygon with Contrast Paints 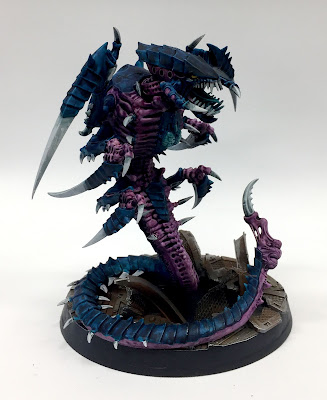 Following on from a previous post "Painting Space Hulk Genestealers the quick and easy way" and my son's enthusiasm for painting Genestealers; I thought I would share what happened next.

My son has finally got the painting bug 'literally' and he said to me "I like Genestealers, but I want to paint a big monsters", I knew this would happen, but anyway.... I spent a few days looking for a suitable monster to buy cheap on ebay and we came across a Trygon for £25 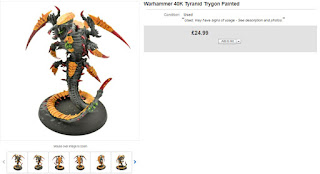 Not the cheapest but difficult times on ebay at the moment.  He settled on a Trygon because it was big, very big, and then he said could I make a base for him just like the Genestealer bases but.. I want it bursting up from underneath the floor of the space ship.  As it was going to be a one off, I agreed.

So I put the Trygon in some suitable paint remover, and set to work.  I used spare damaged end floor sections from GW's Shrine of The Aquila, plastic girders, Rhino doors and wire mesh.  I shaped them to give the effect of something bursting from the ground and I used sprue underneath the floor tiles to give a little extra depth to the hole. 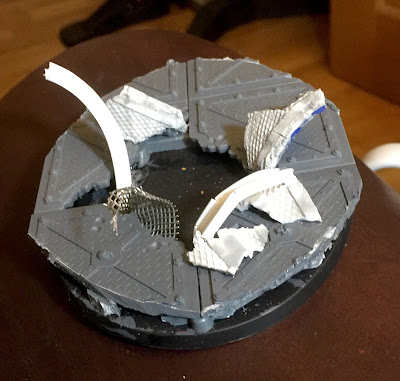 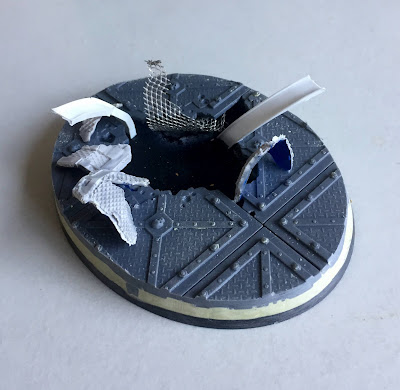 I primed it grey and used black primer on the hole. 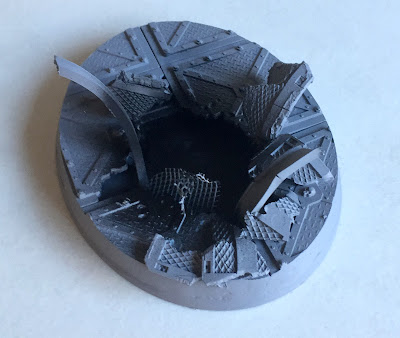 As with the Genestealers I primed the Trygon with grey underneath with a white highlight. 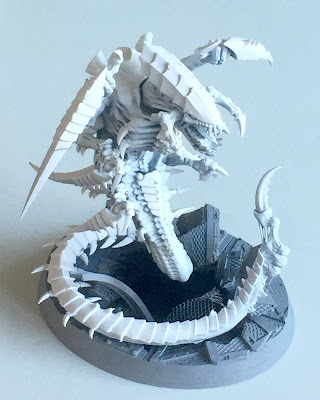 I then handed it to my son and said enjoy have fun.  This was a strange feeling to spend a lot of time and effort making something and then give it to someone else to paint.  I was feeling a little nervous and I was wondering whether or not he would actually paint it. 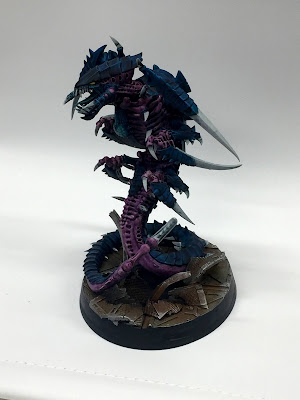 Well I have to say I was extremely shocked it took him 2 days and he asked for help using the airbrush on the base.  I also helped him with dry brushing the base with silver and the detail of the eyes but that was all. 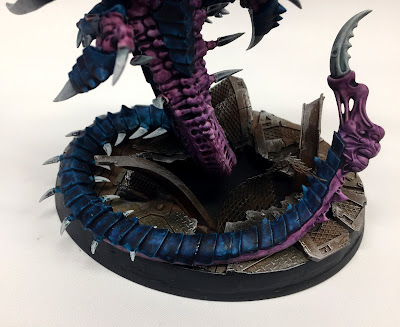 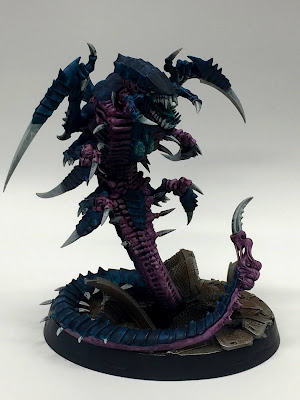 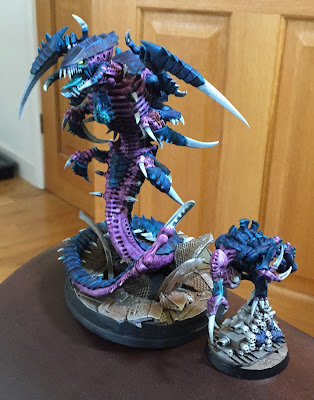 A part from the base there is no highlights what so ever on this model just contrast paints and an ink wash - AIkhelian Green with a Druchii Violet wash for the carapace, Magos Purple for the skin, Gryth-Charger Grey for the claws and Aethermatic Blue for the tongue.  Also Flash Gitz Yellow over white for the eyes and he is done, quick and effective.  Oh crap, he liked it so mush he spent his own money buying a big bulk order of Tyranids on ebay.... but I said "you haven't finished painting your Genestealer Cults" and he pointed out how many figures do you have that are incomplete? erm.......... and Oh double crap does this mean I have to make bases for all his army :(