Throne of Skulls - Could this be the best looking Tyranid army

Well Throne of Skulls was a roaring success, 5 lads from a small town called Ormskirk in Lancashire, went to Warhammer World in Nottingham, had a blast and won a couple of awards, 8 in total with 3 or us being nominated for best painted army, Chris Otterburn, Dave Western and myself and Dave Western's Tyranids as seen on http://40kaddict.blogspot.co.uk/ winning the award, congratulations Dave your army truly dominated the cabinets.  Although I didn't do too bad my self, nominated for best painted army, I also won the Scribes award (with my Khorne Helmet), best painted Beast (with my Nurgle Deamon Prince), best painted Engine award (with the Hellfly) and finally I won best Chaos Space Marine Player.

One of the things that stood out over the weekend was being drawn against Dave's Tyranids on the second game, It stood out because on the journey down Dave asked me for a game on the Friday night before the tournament, I had to admit to Dave that I had been ignoring his calls for a game and I really didn't fancy fighting his nids because they give me the fear, "I'm not fighting you I'll get my ass kicked" was one of the things that came out my mouth, this went down really well and we didn't have 20 minutes of banter and name calling, mostly at my expense, honest :) 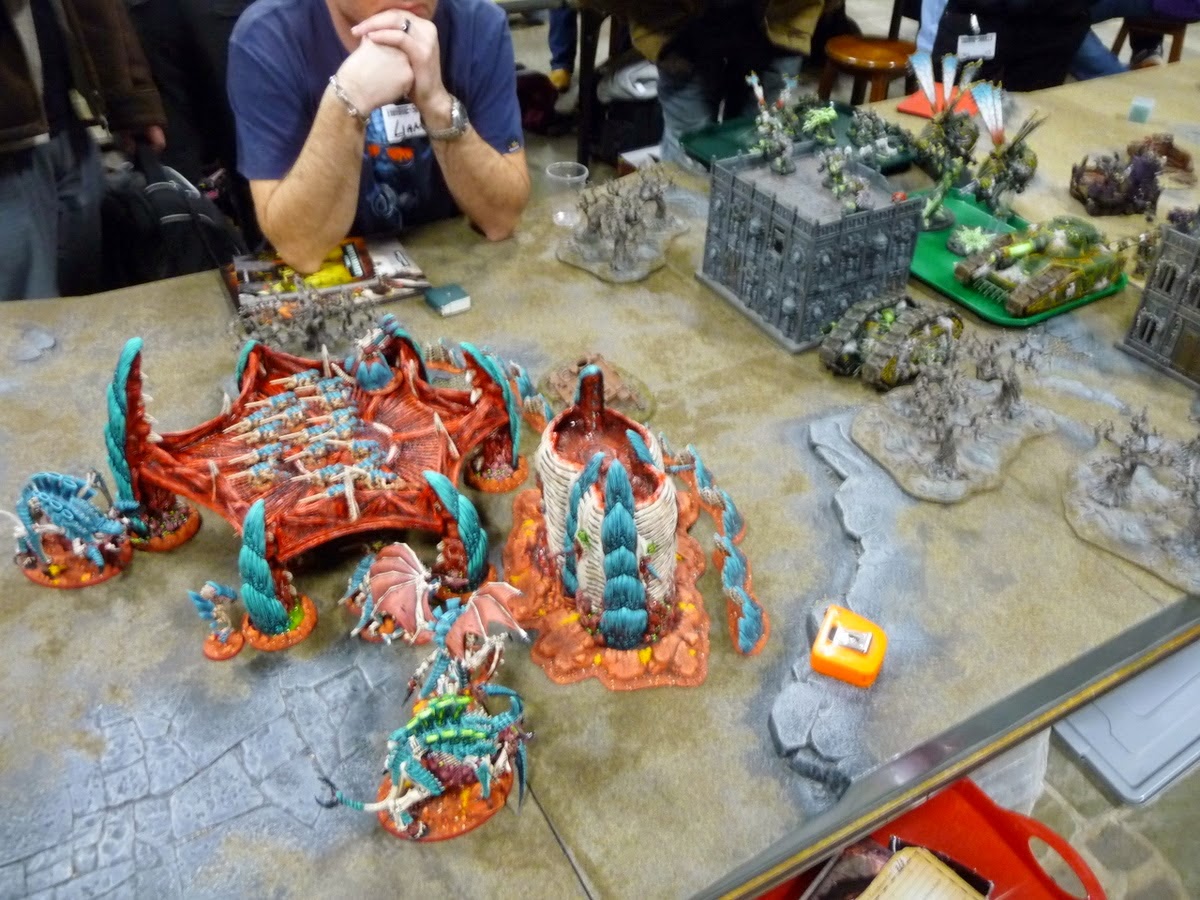 Now I'm not one for typing up battle reports generally because I cant remember what I had for breakfast never mind what happened on a turn by turn basis on a game I had last week :)  luckily for me Dave writes up all his games and it's worth a read.

Not long now..... 4 days to go before Throne of Skulls and still working through my army.  Although it's not in my list, this is my contribution to the Lords of War Painting competition and more WIP shots 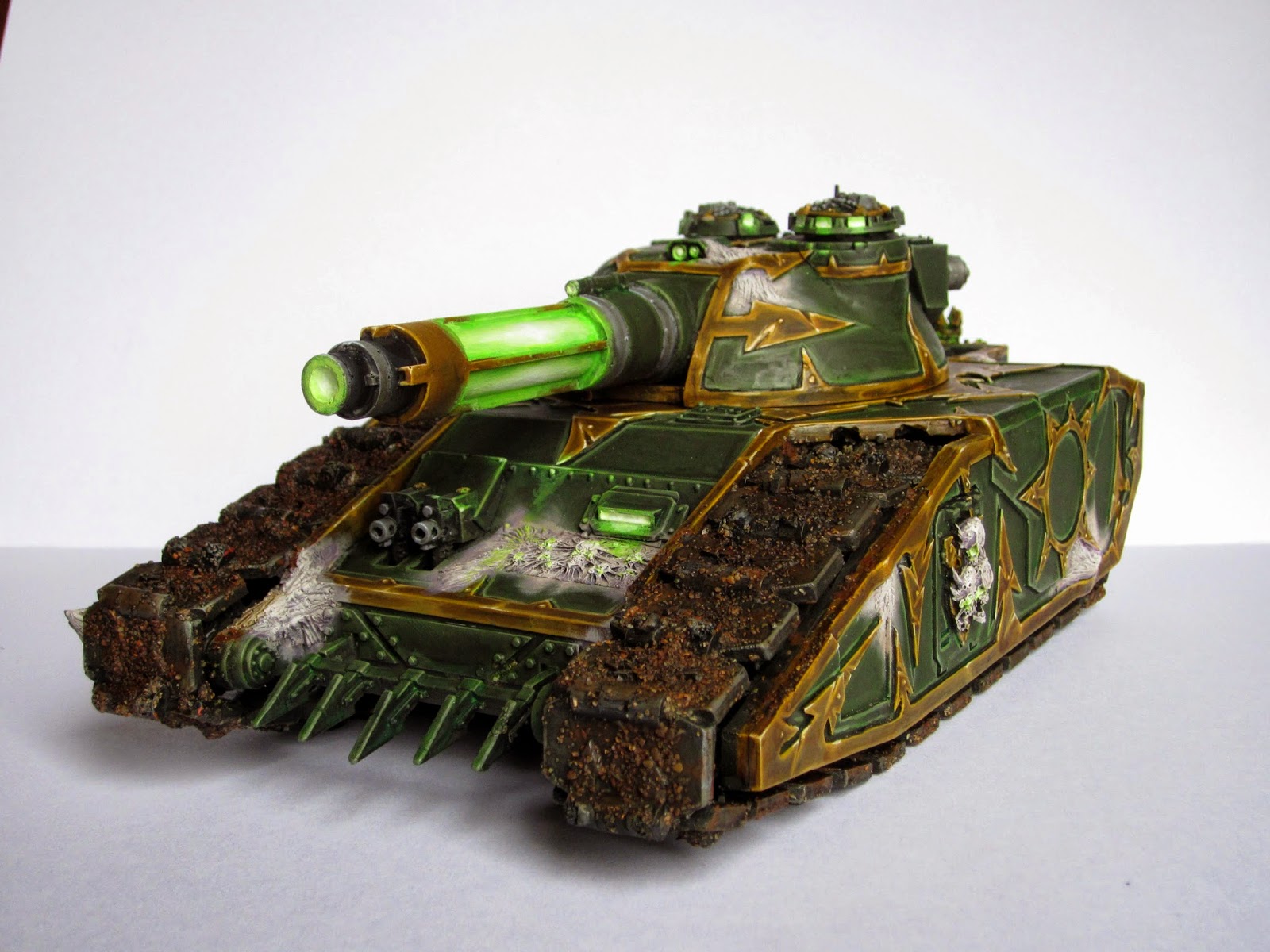 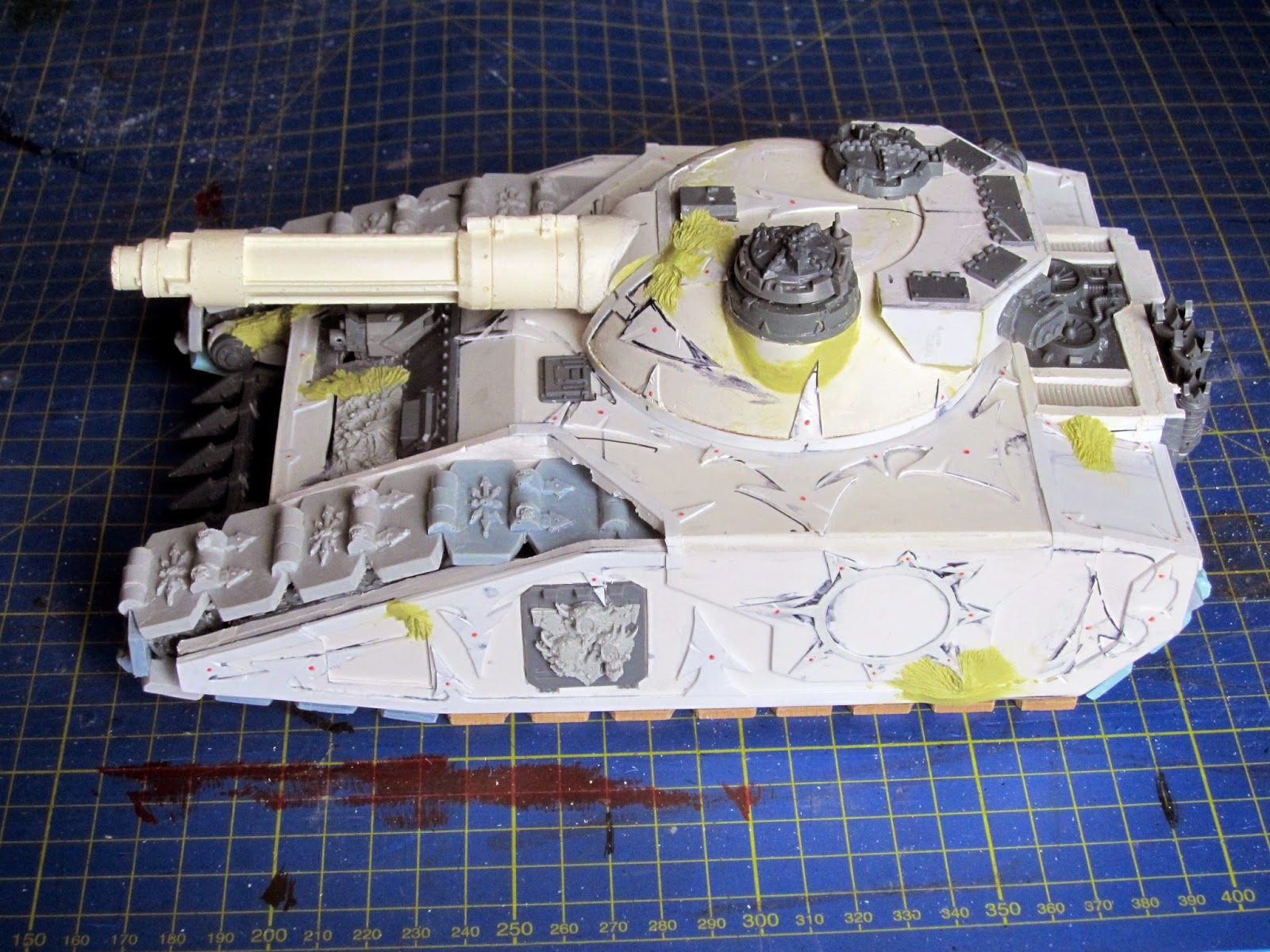 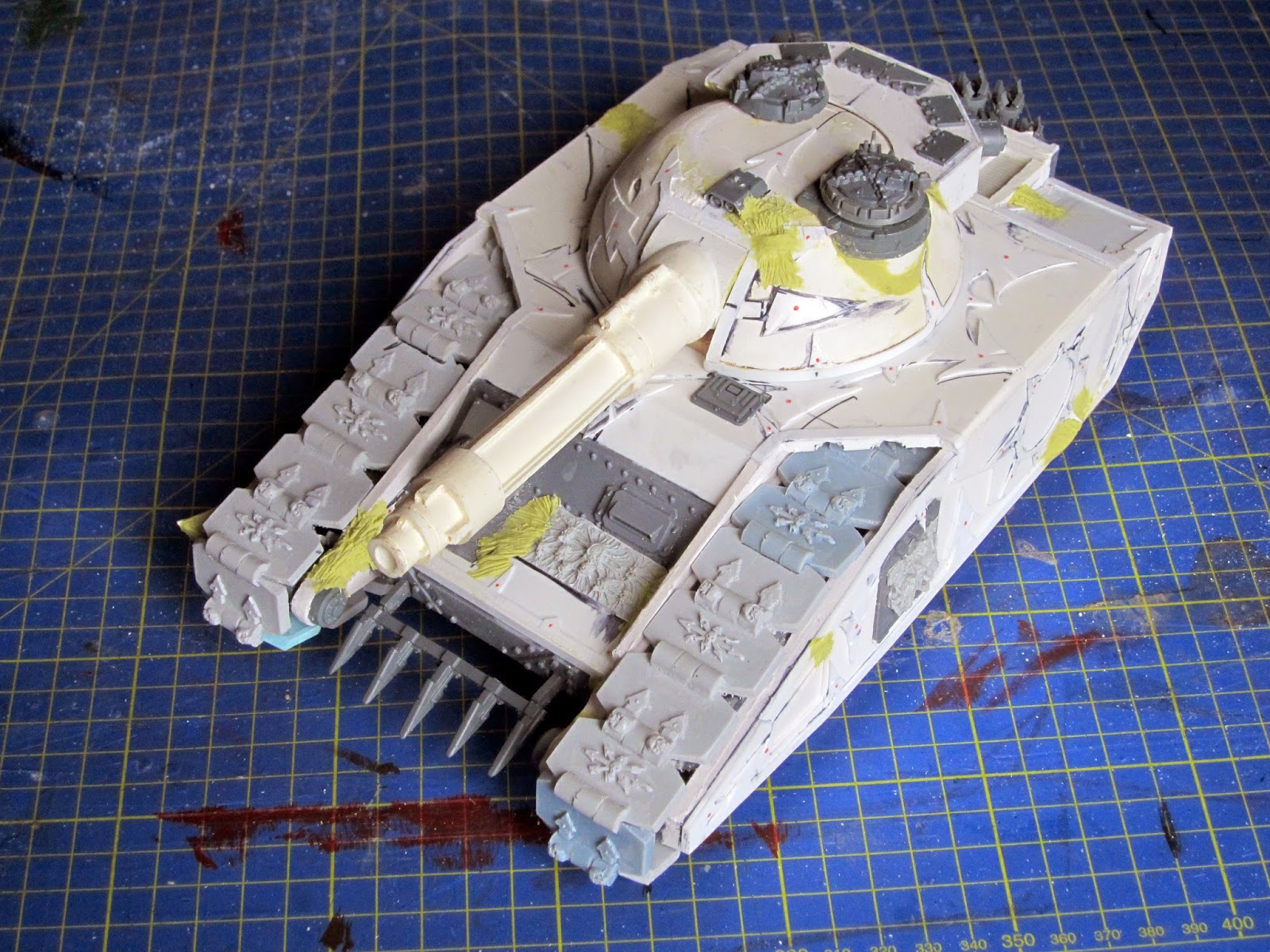 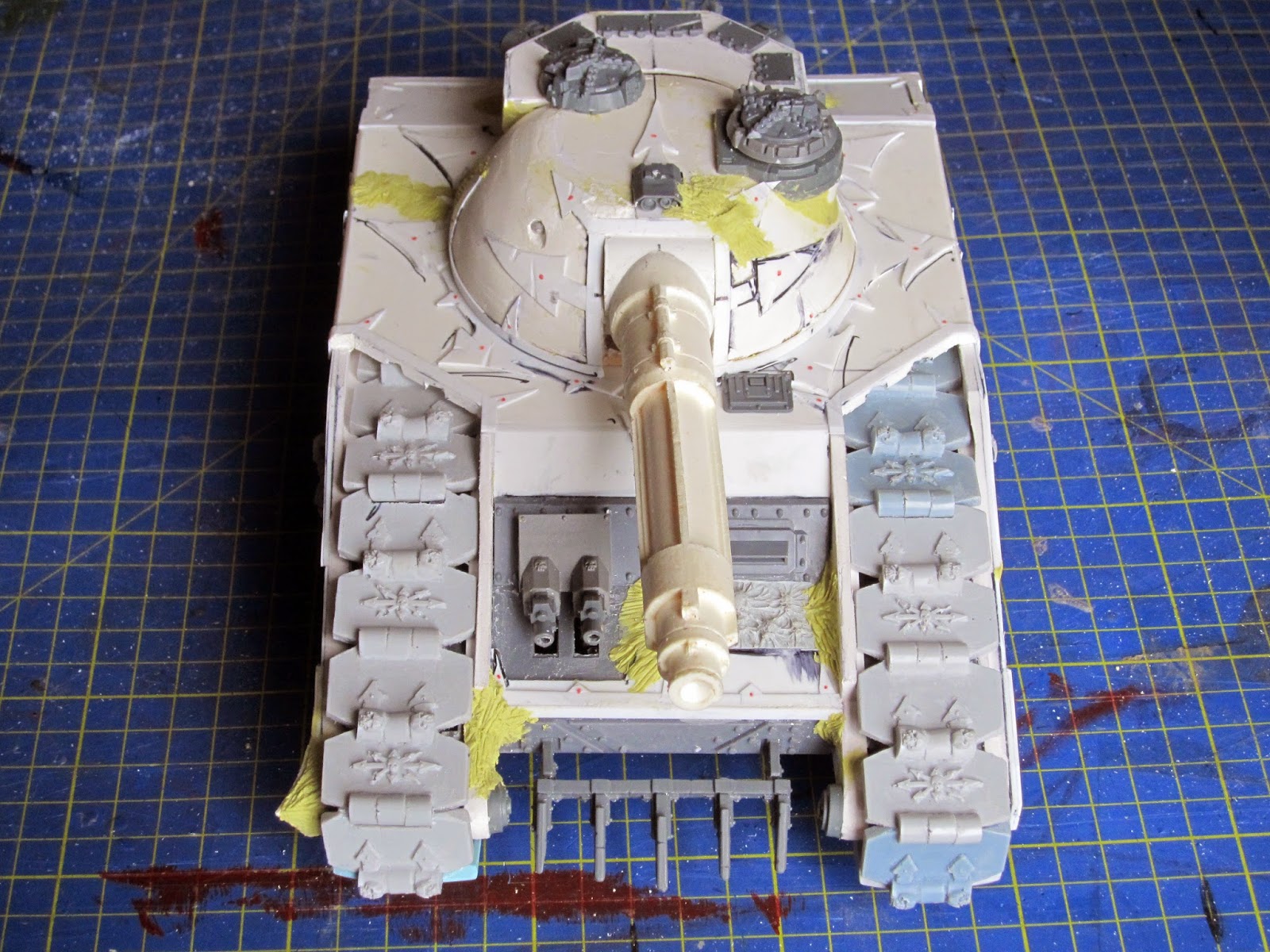 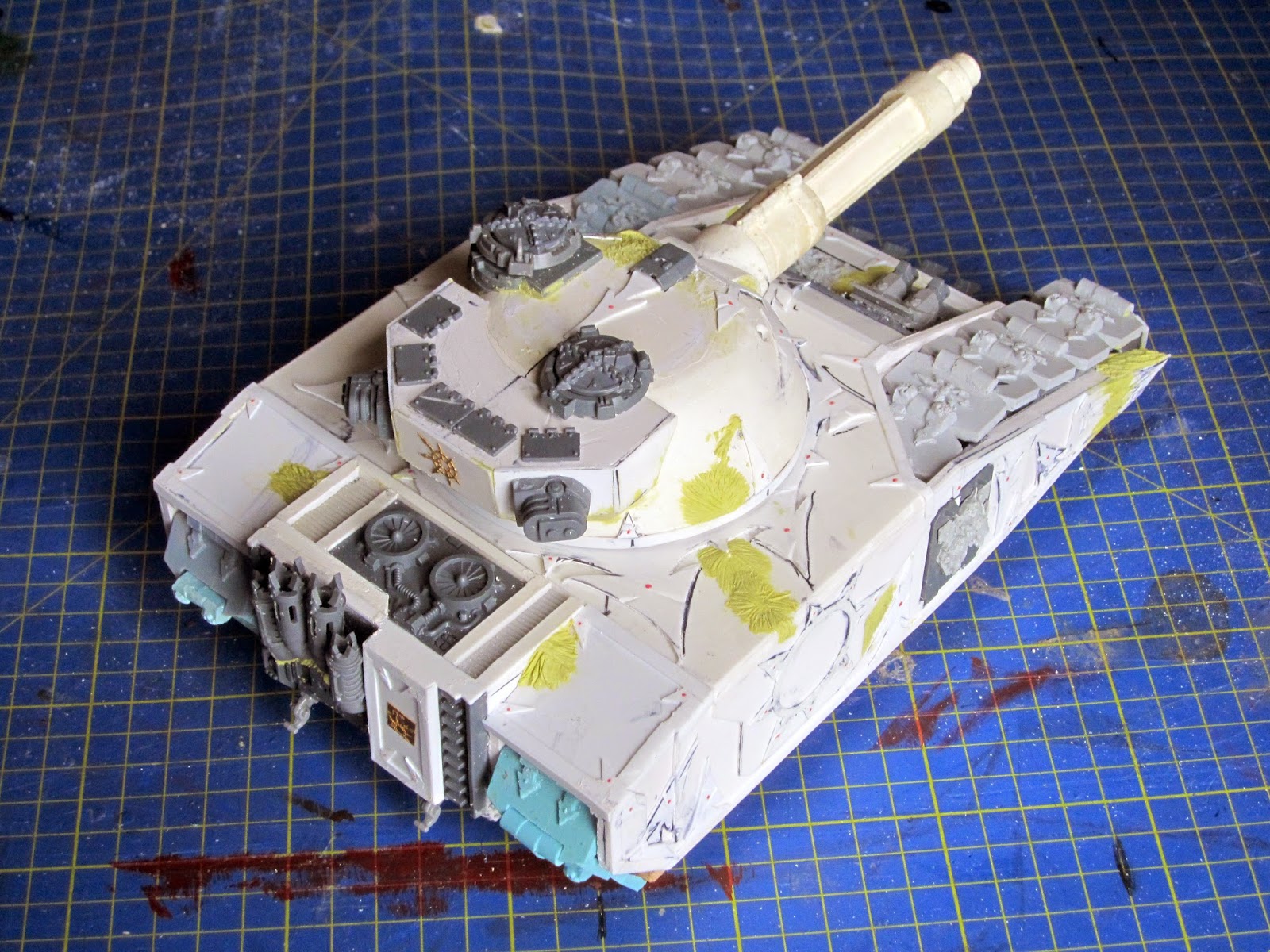 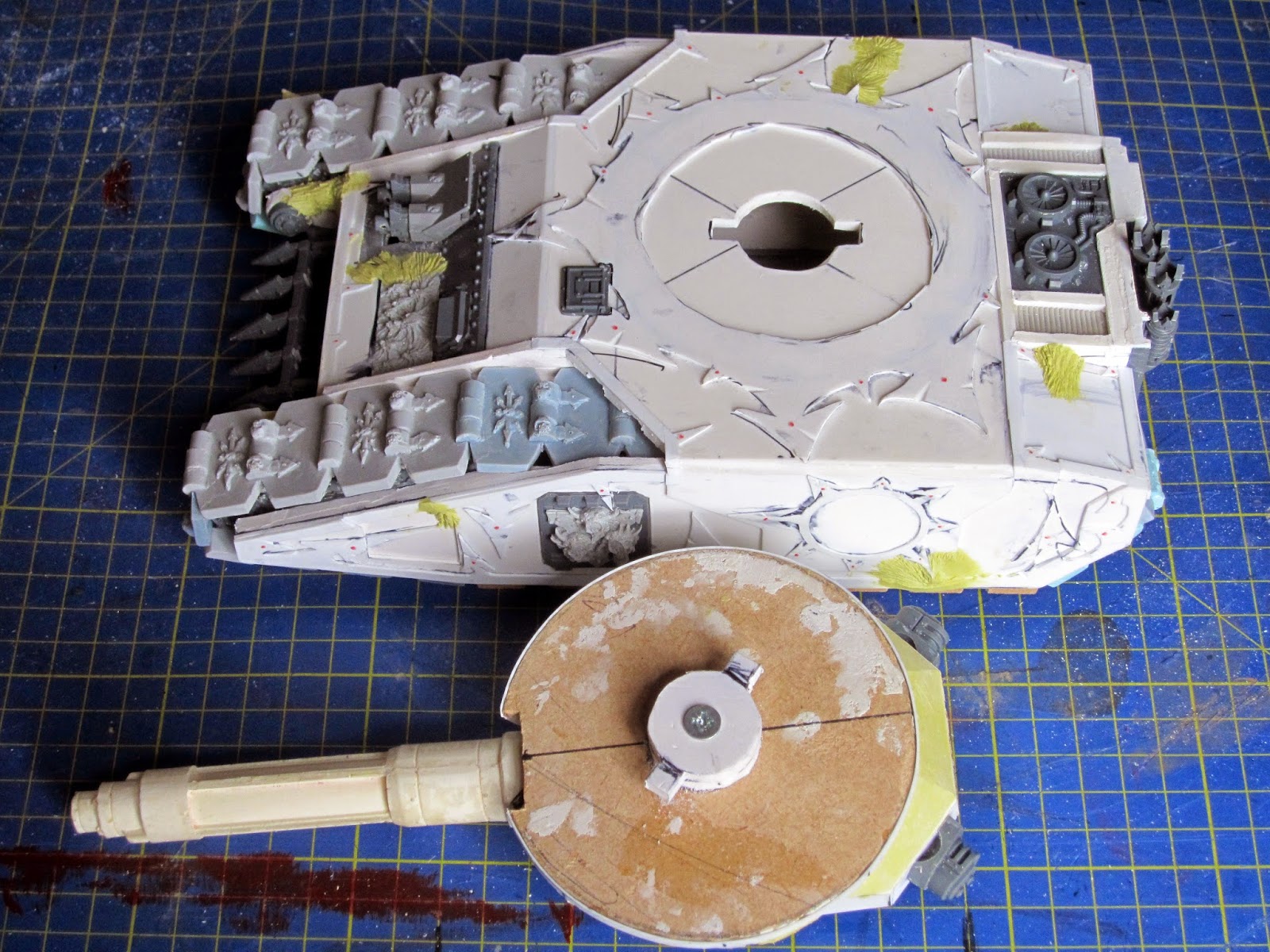 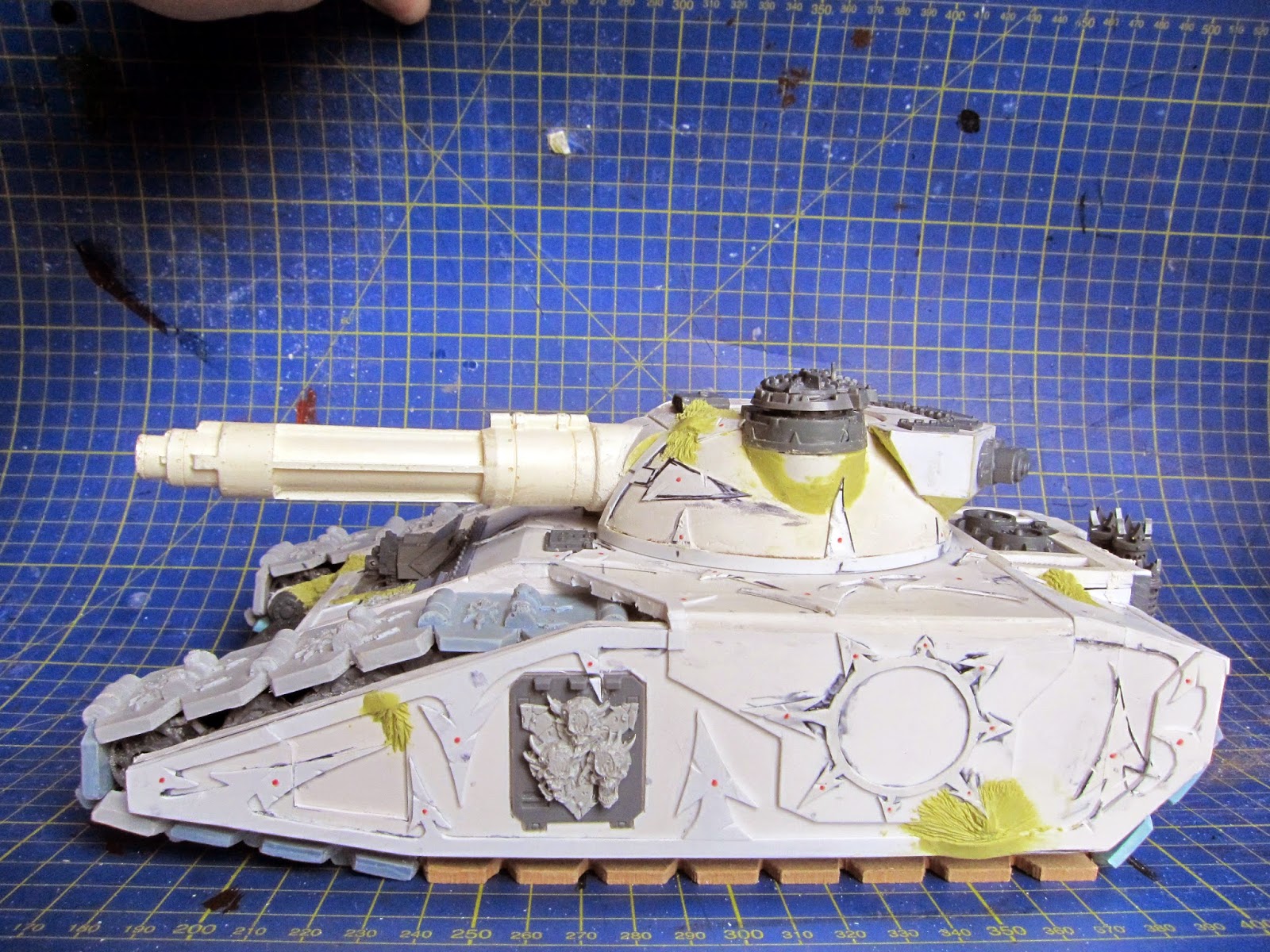 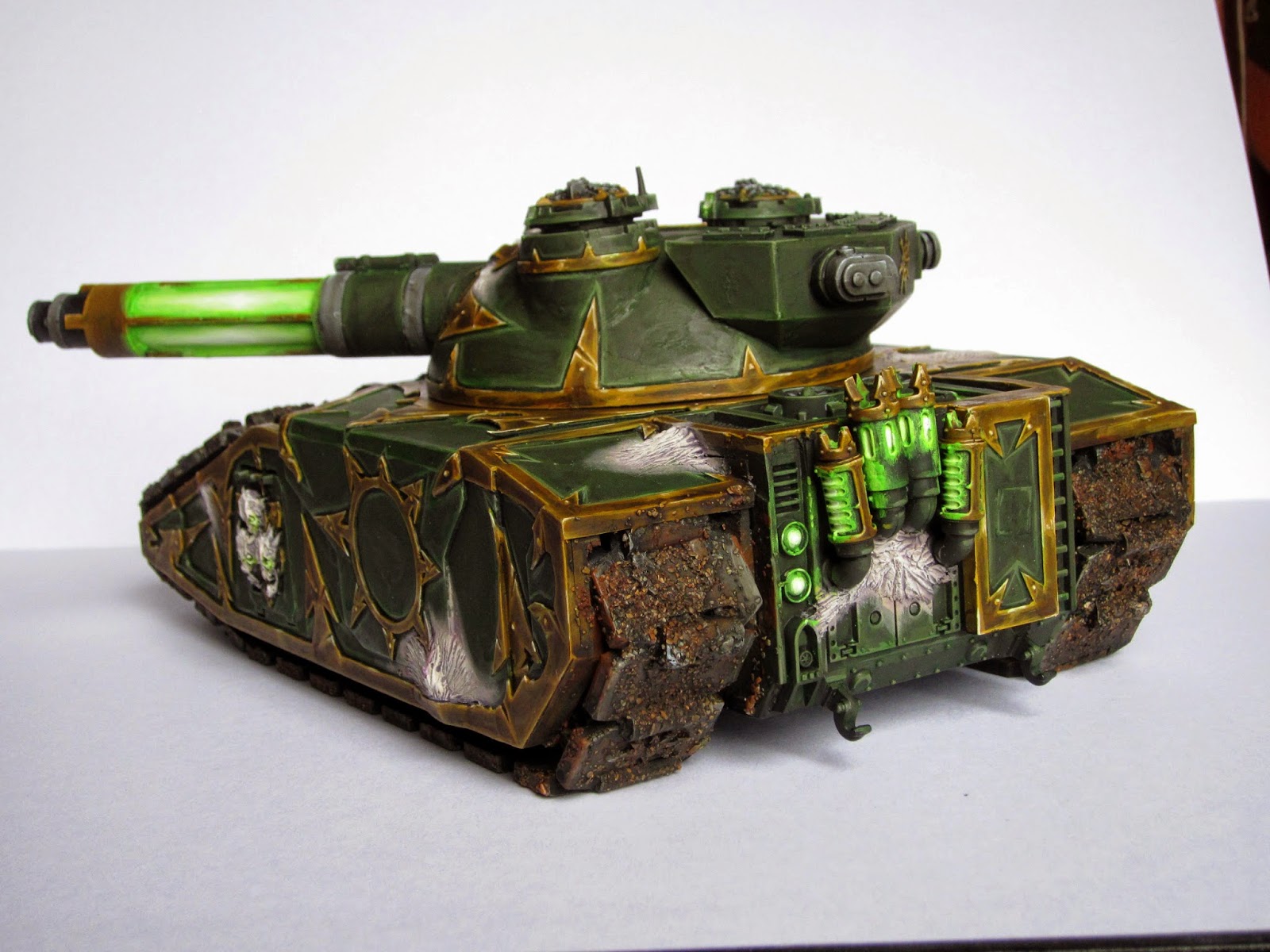 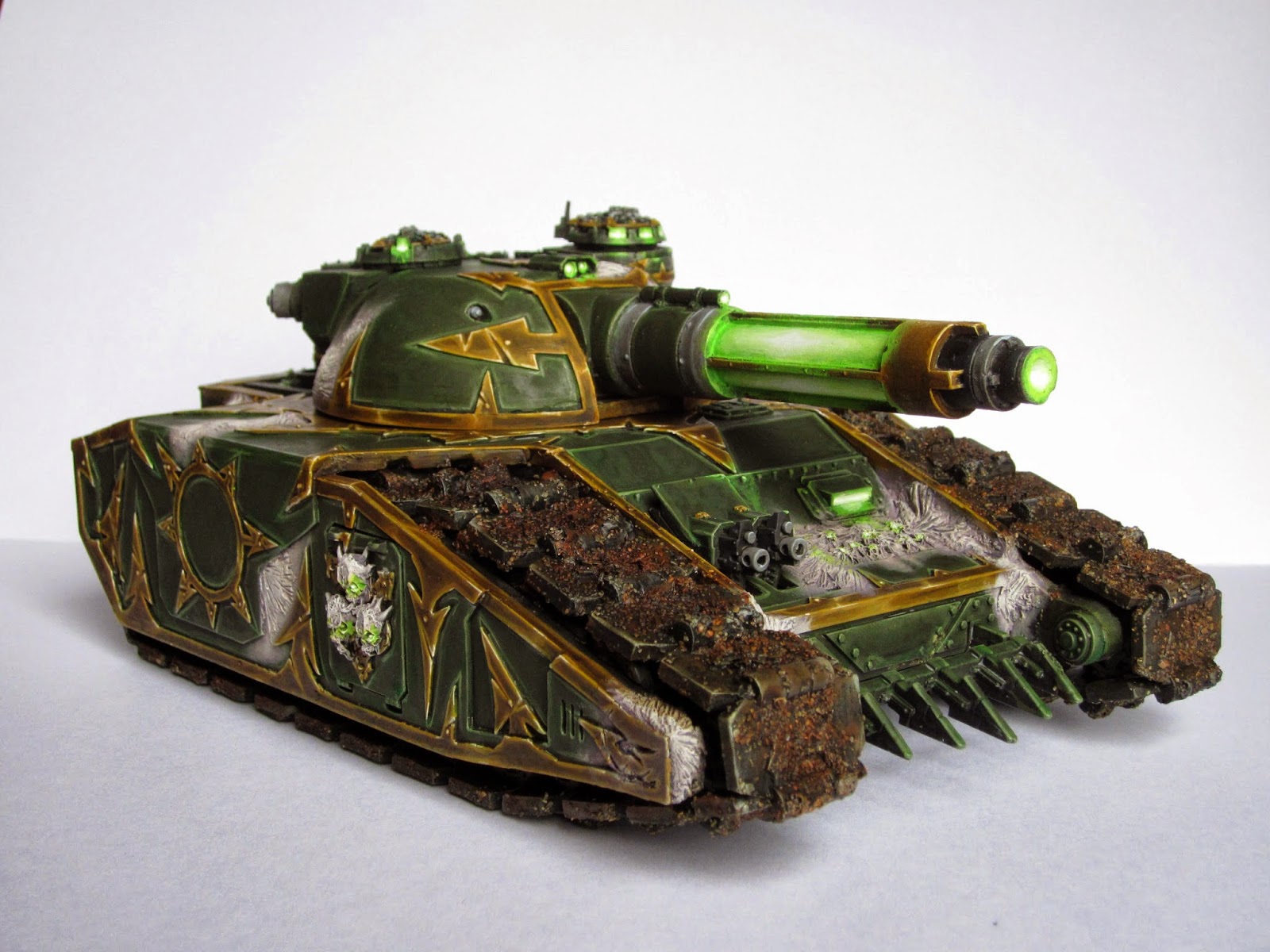 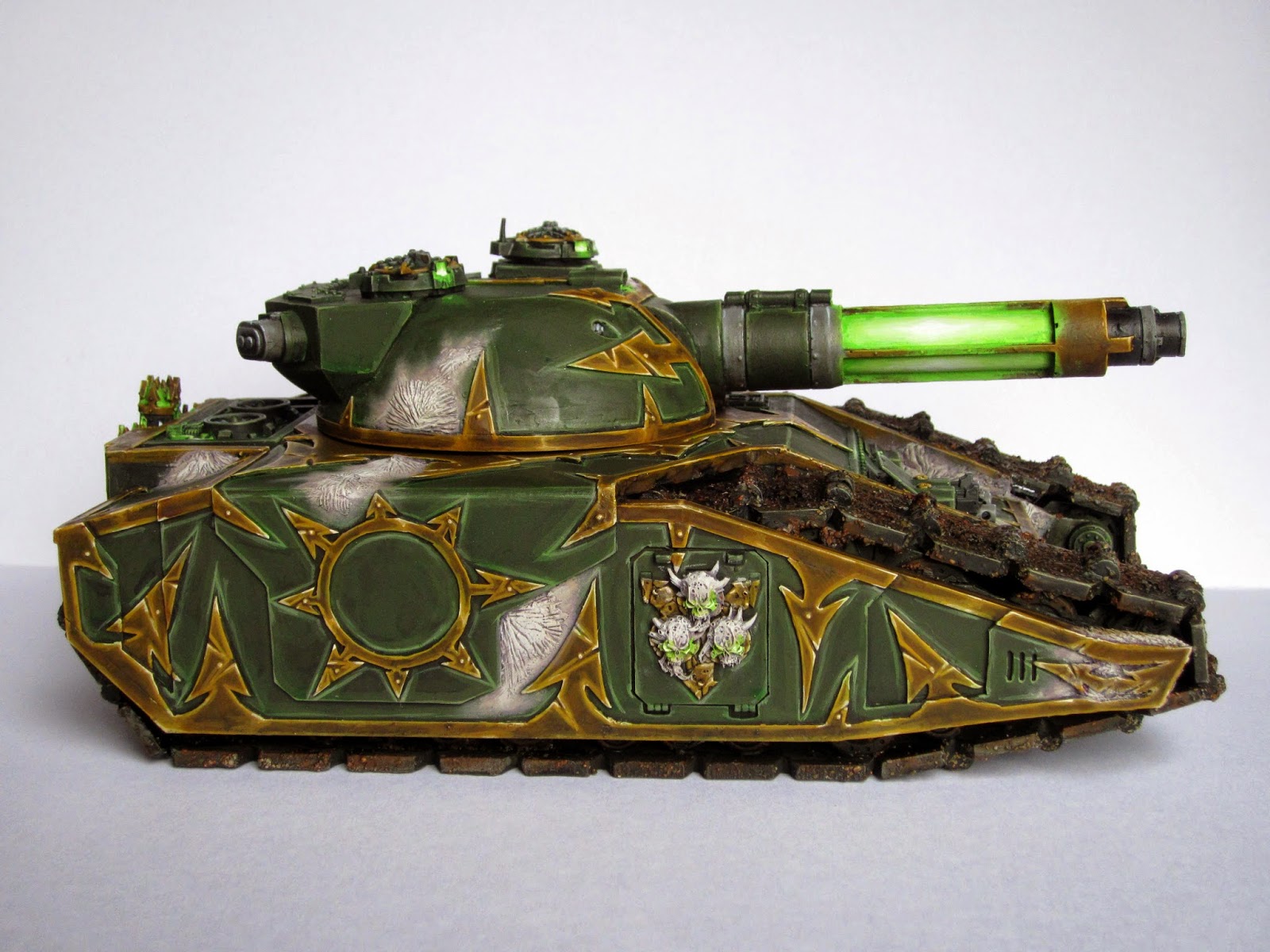 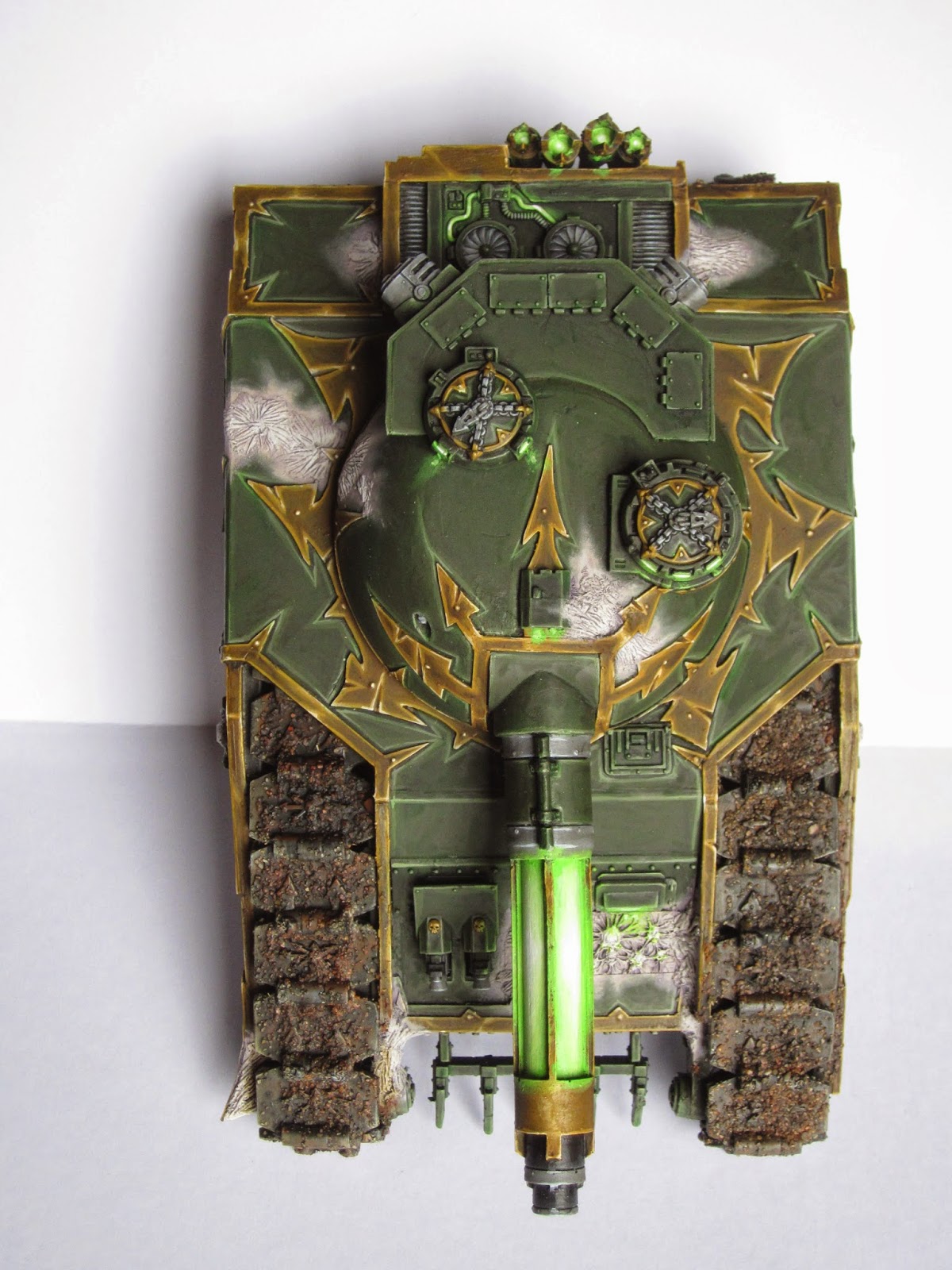 For those enthusiasts out there who spend 50% of their time looking for inspiration while the other 50% in their creative corners building and constructing.  I have images below that show how my Shadowsword / Fellblade cross breed came about.

Warning..... butchery and cheating may have taken place in the creation of this scratch built tank, you have been warned. 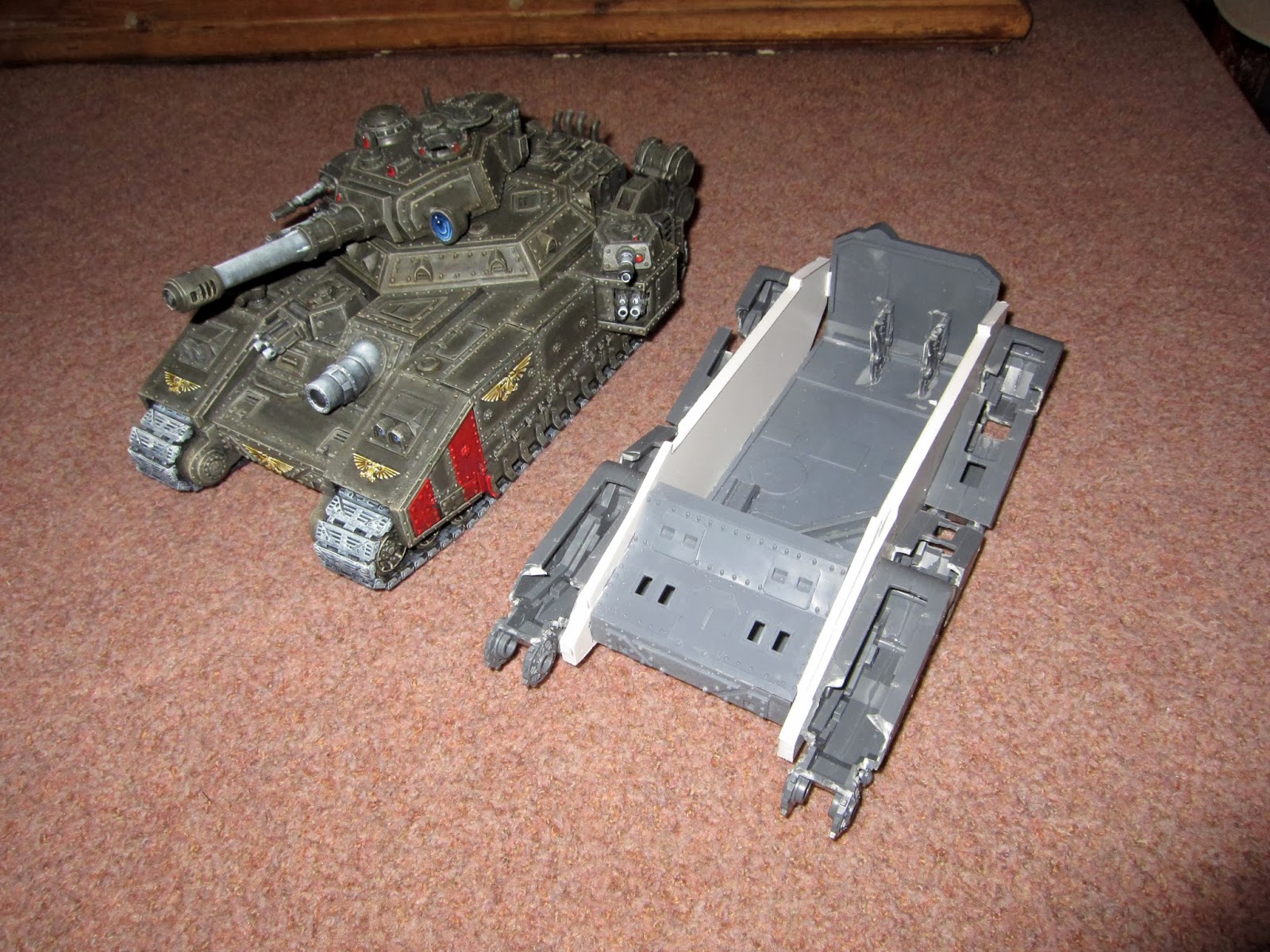 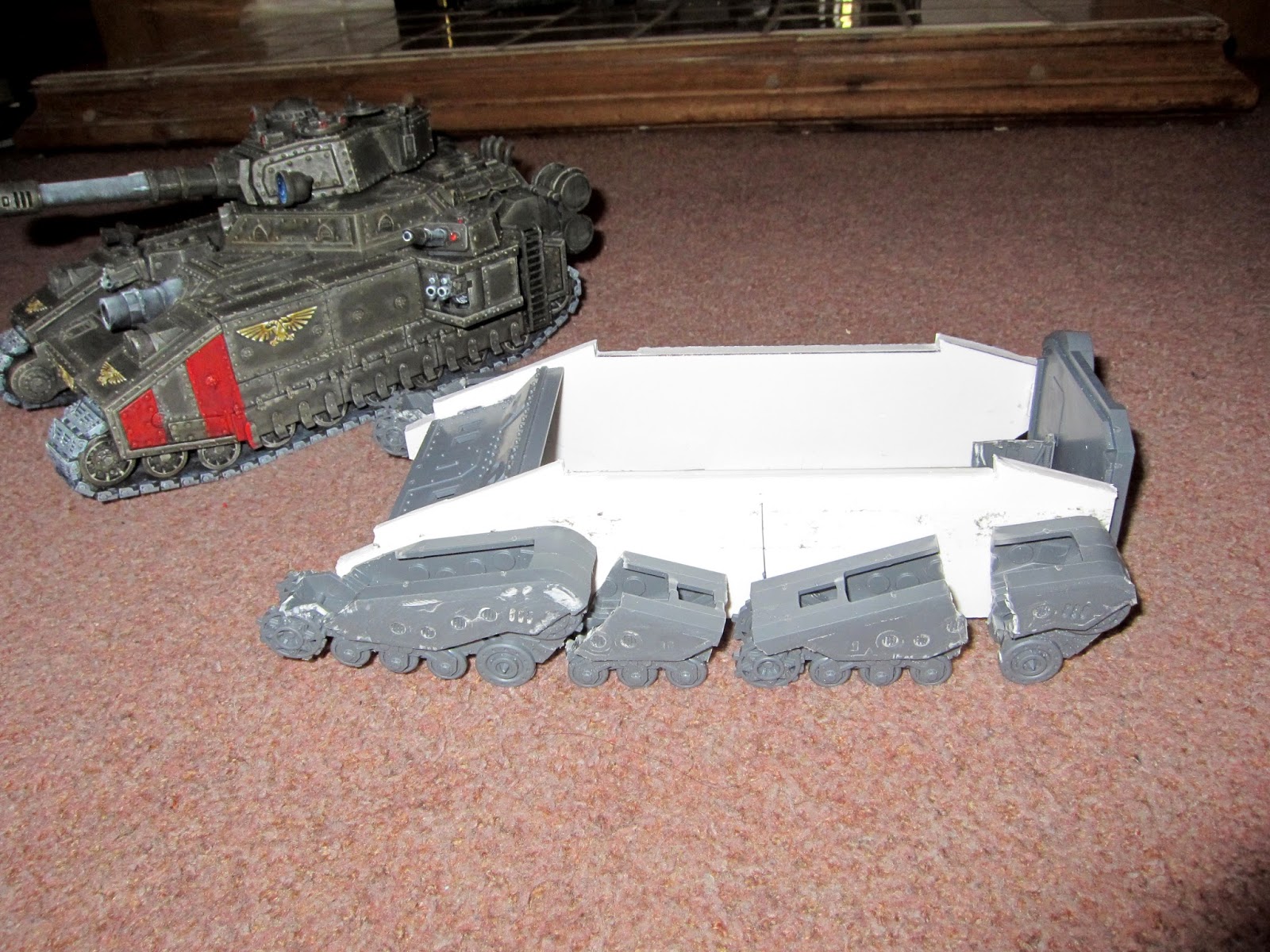 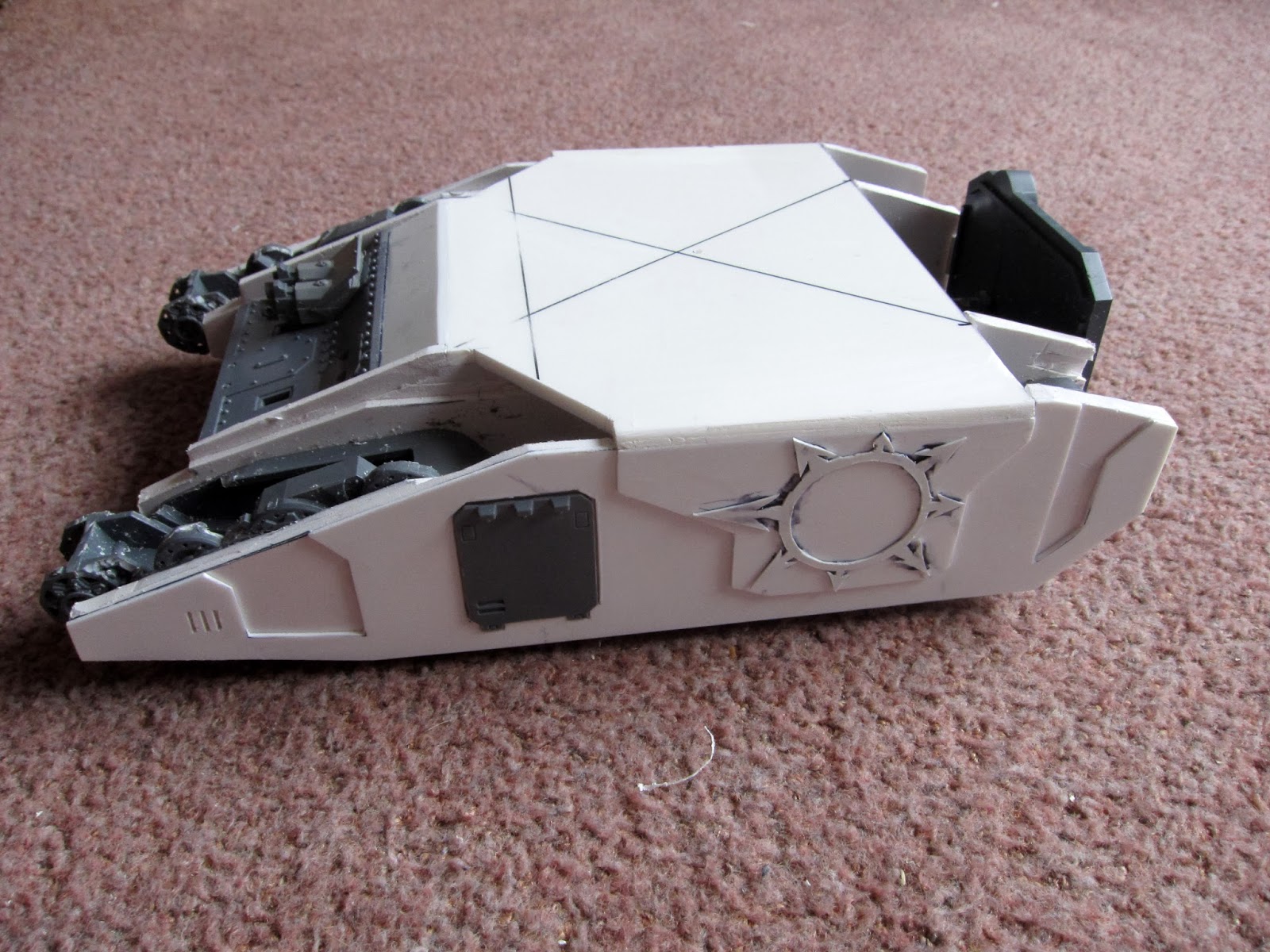 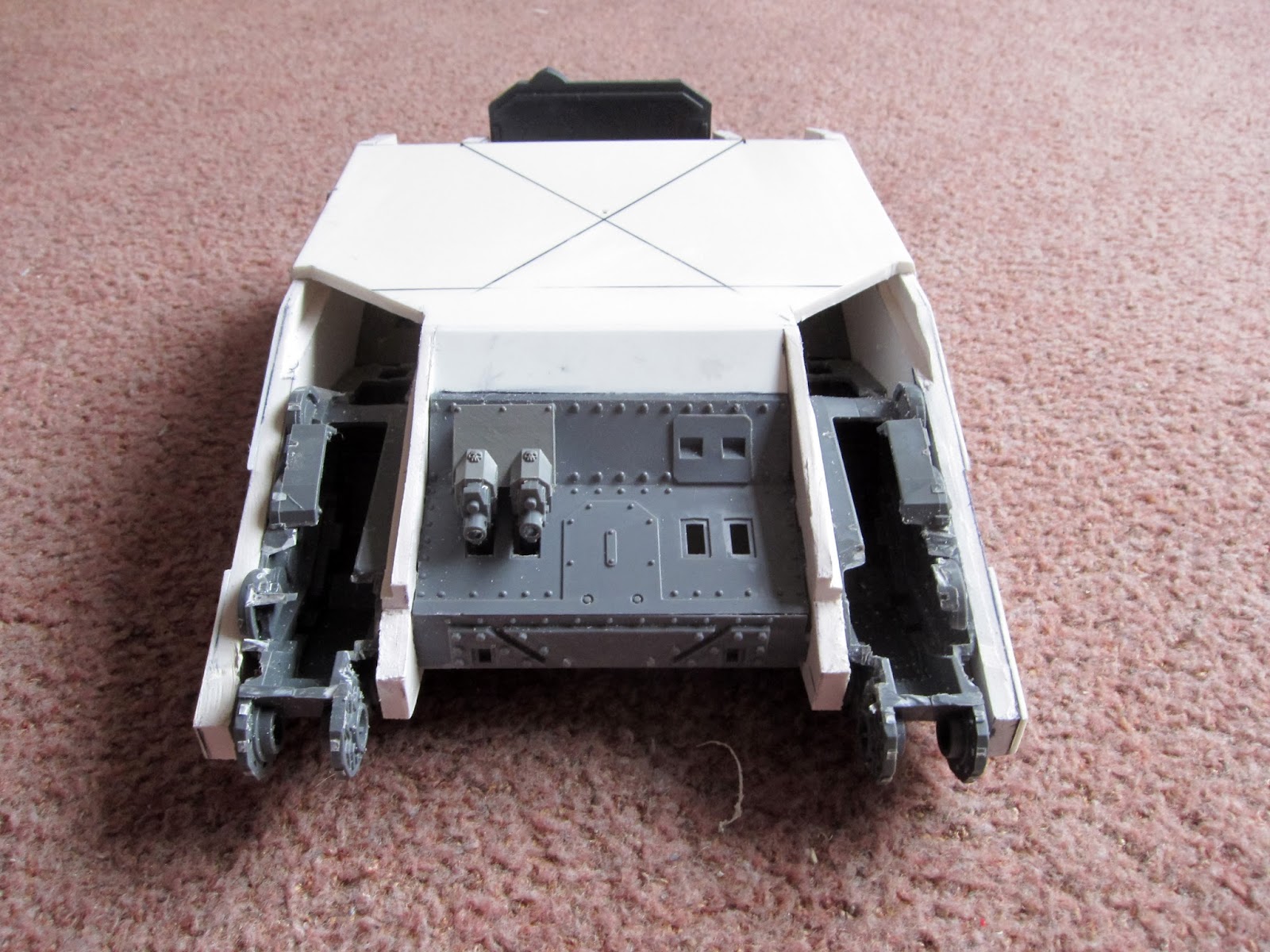 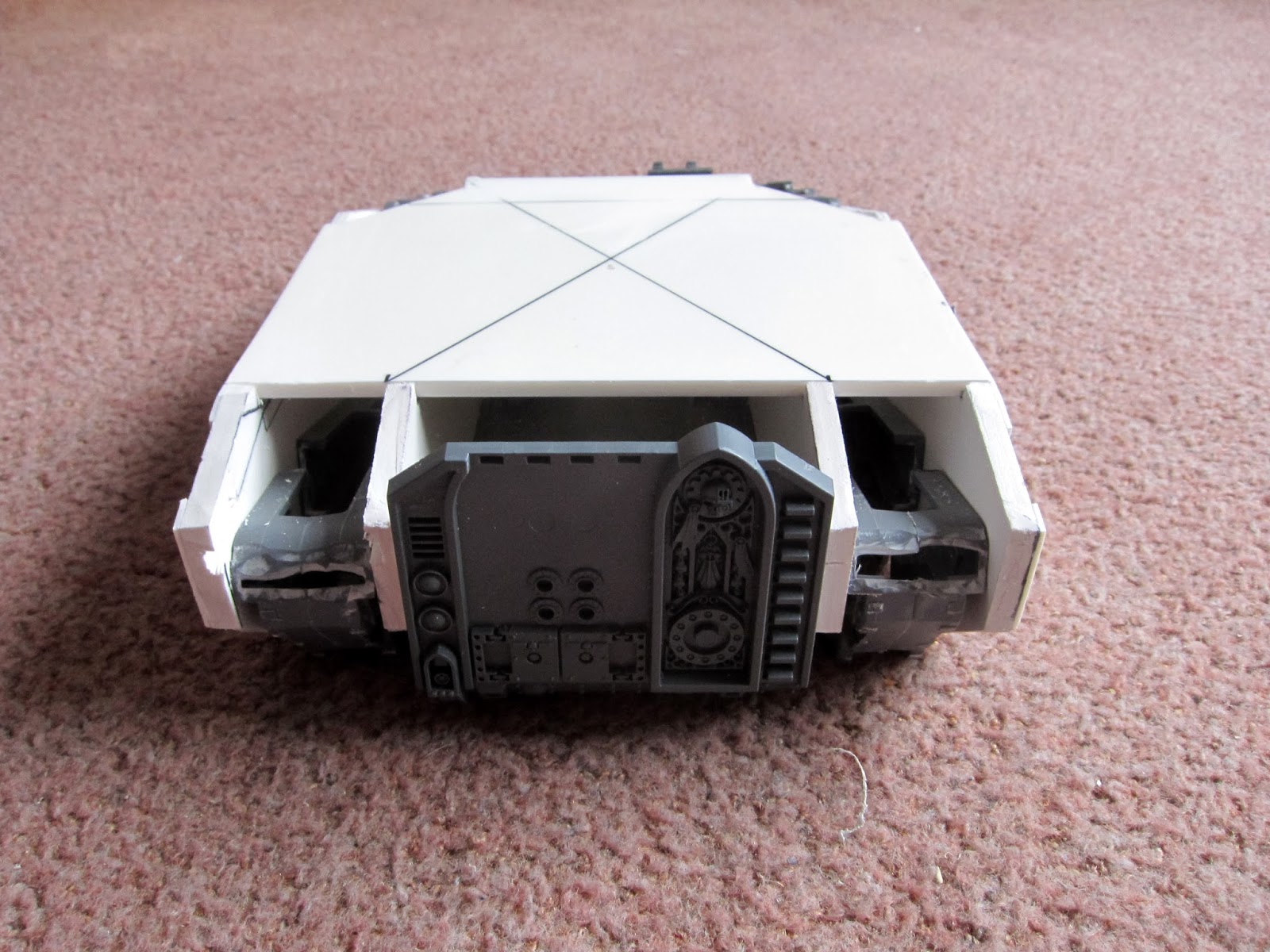 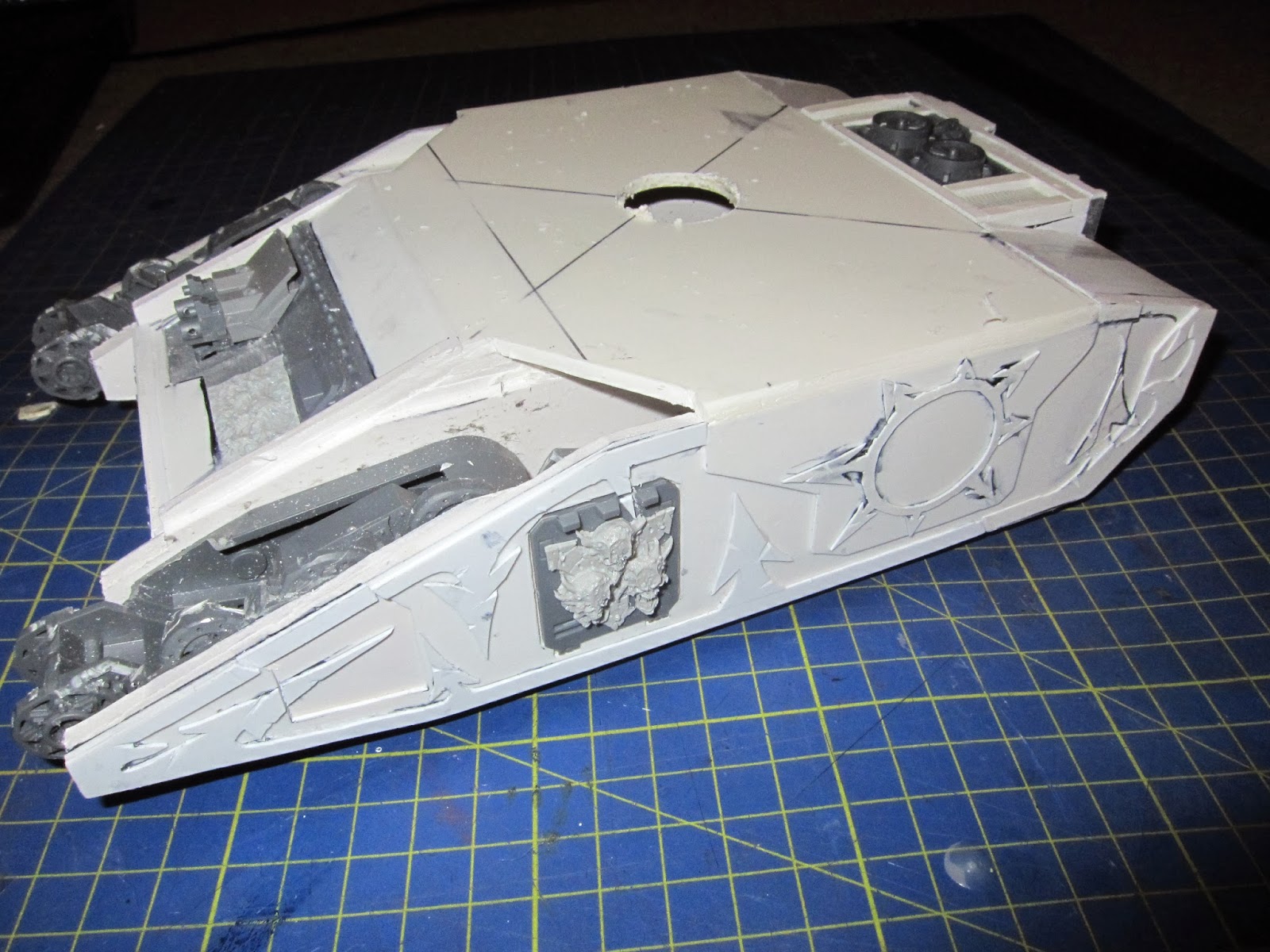 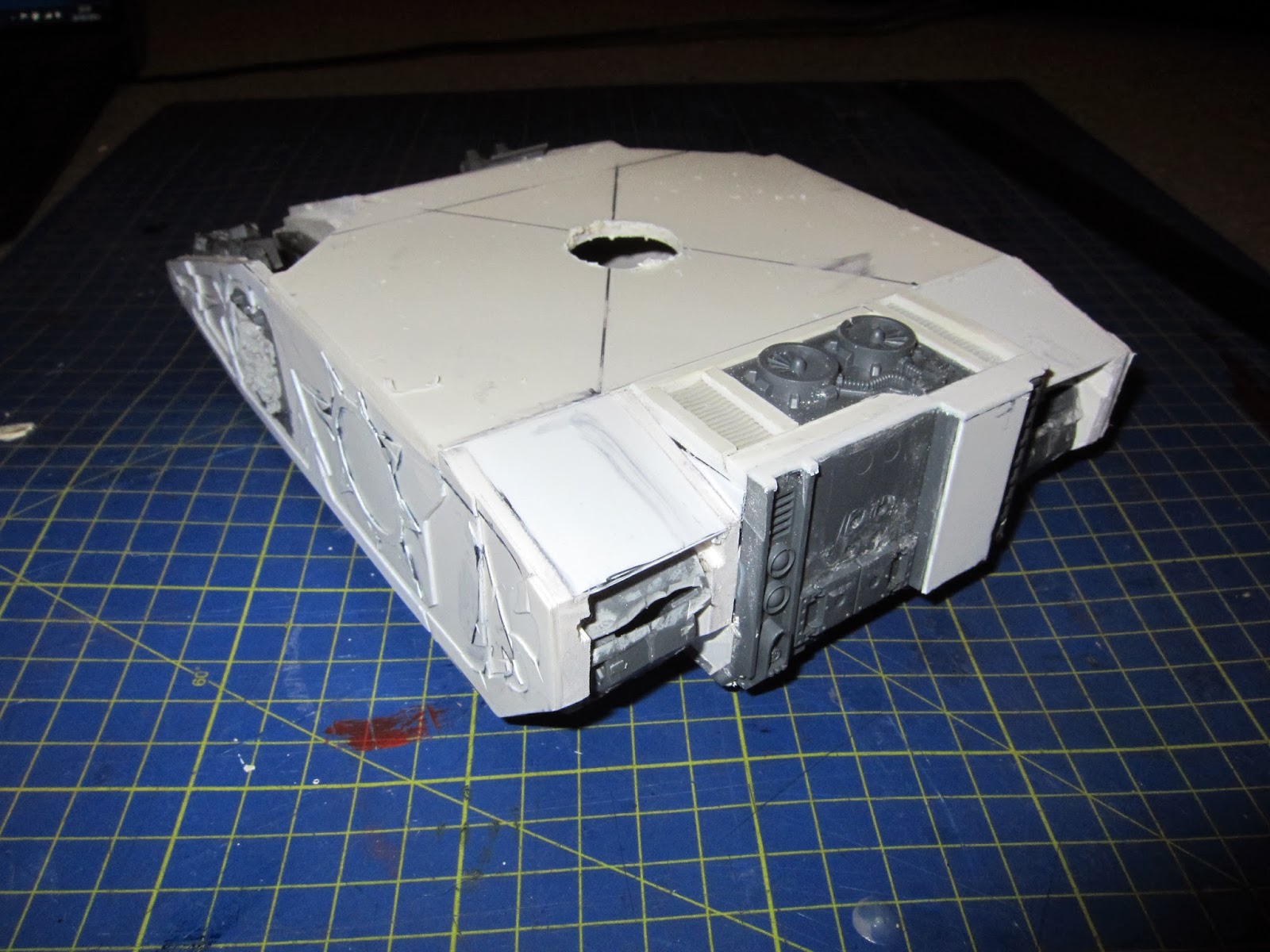 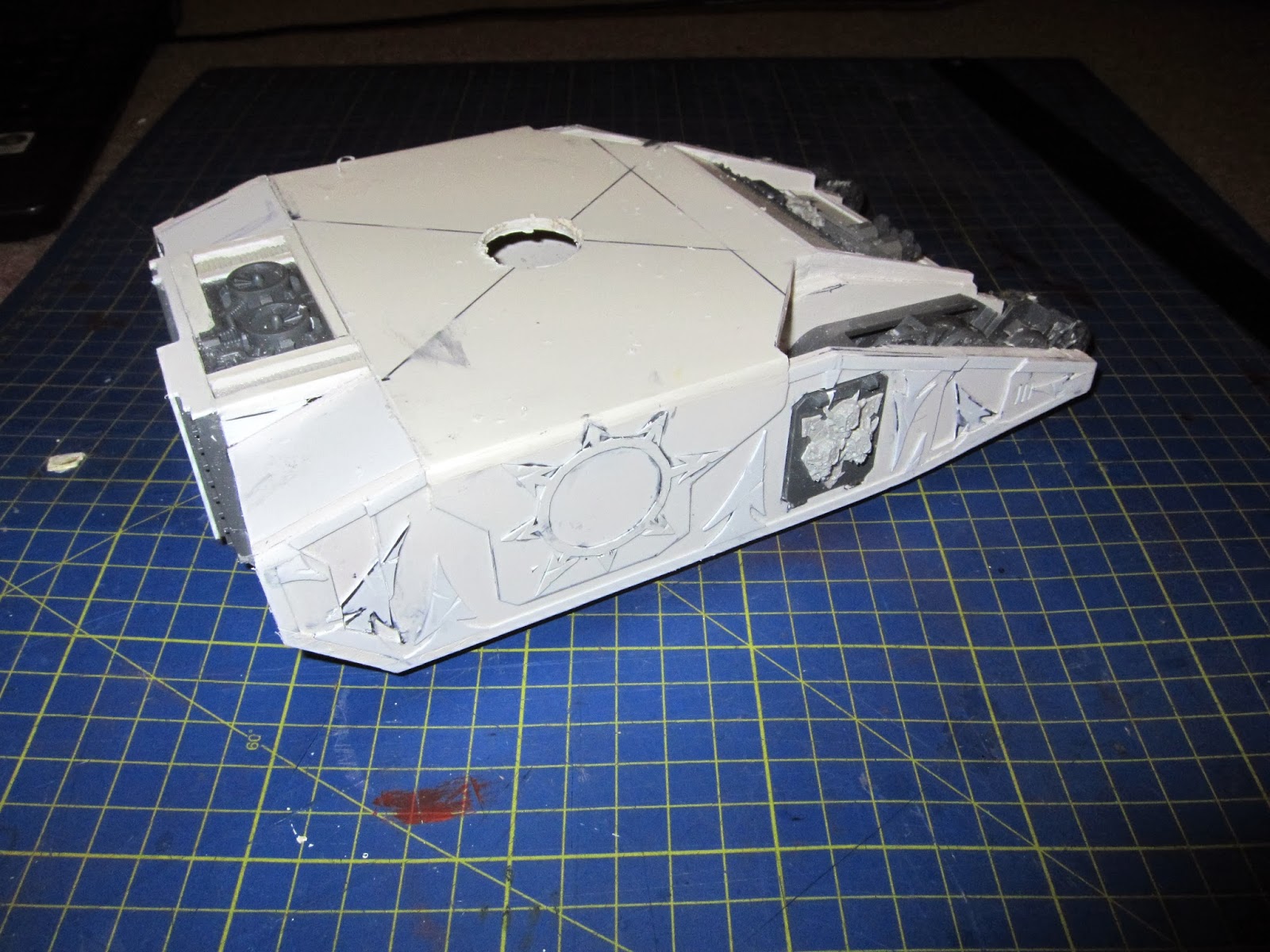 I used the central hull from a Baneblade kit and the tracks/wheels sections from a Lord of Skulls kits, all purchased from a bits store, obviously when they had a sale on at 33%, the total amount of bits purchased came to £10.50        bargain....  Most of the other parts have been taken from my bits box, Also I used 3mm plasticard for the top hull plating and 5mm foamex board for either side of the tracks. finally the detail and trim is 1mm plasticard. 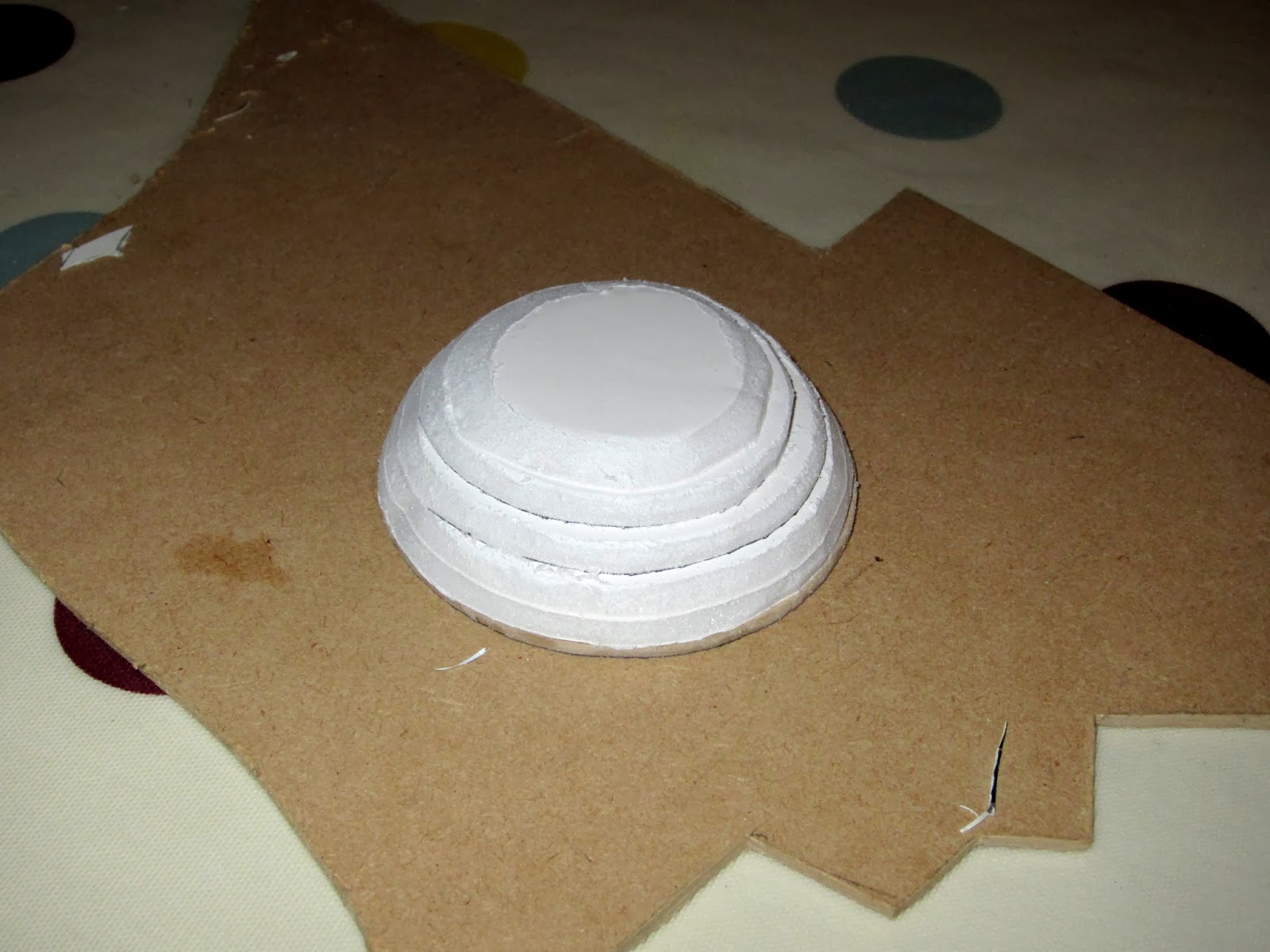 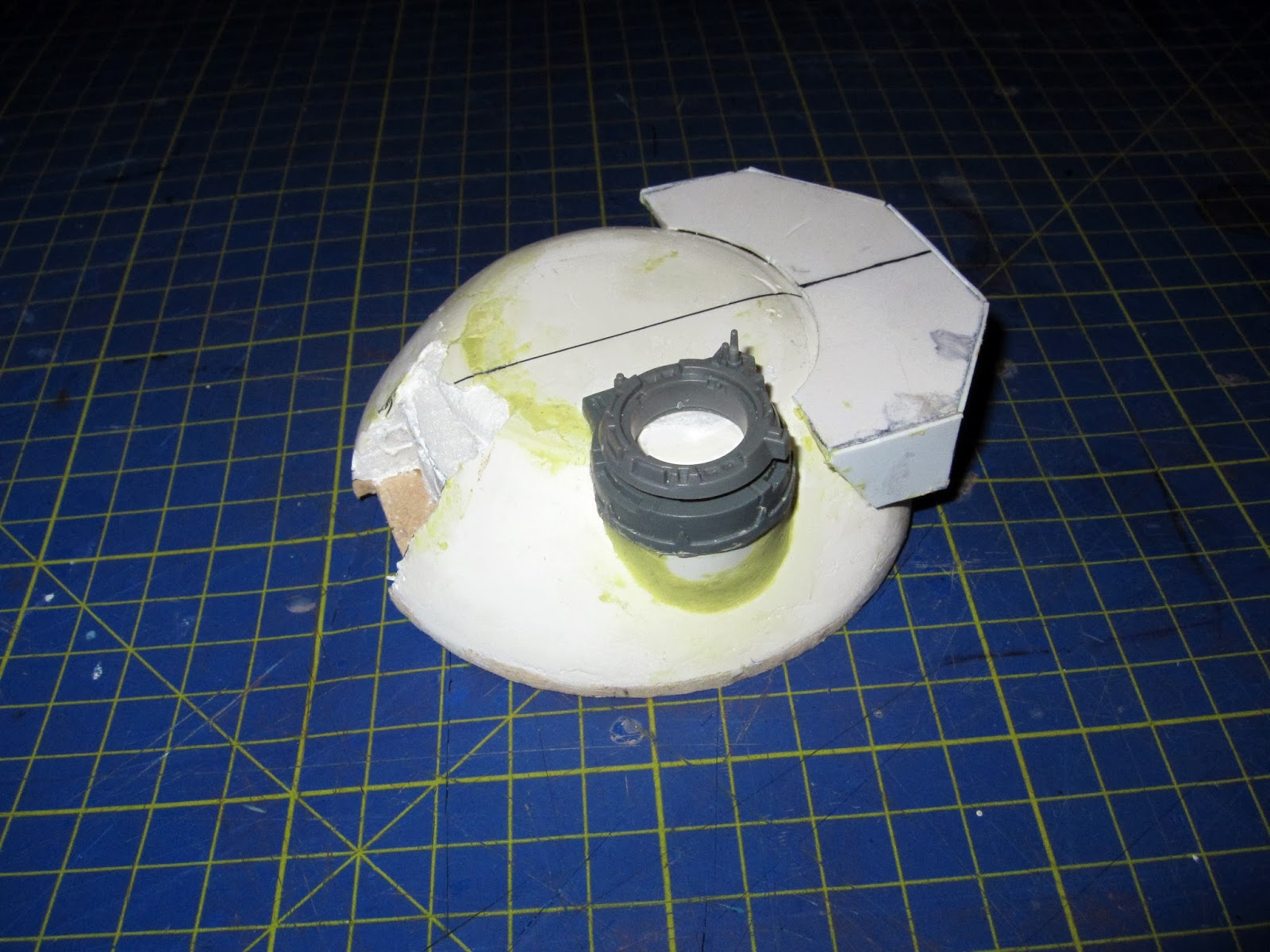 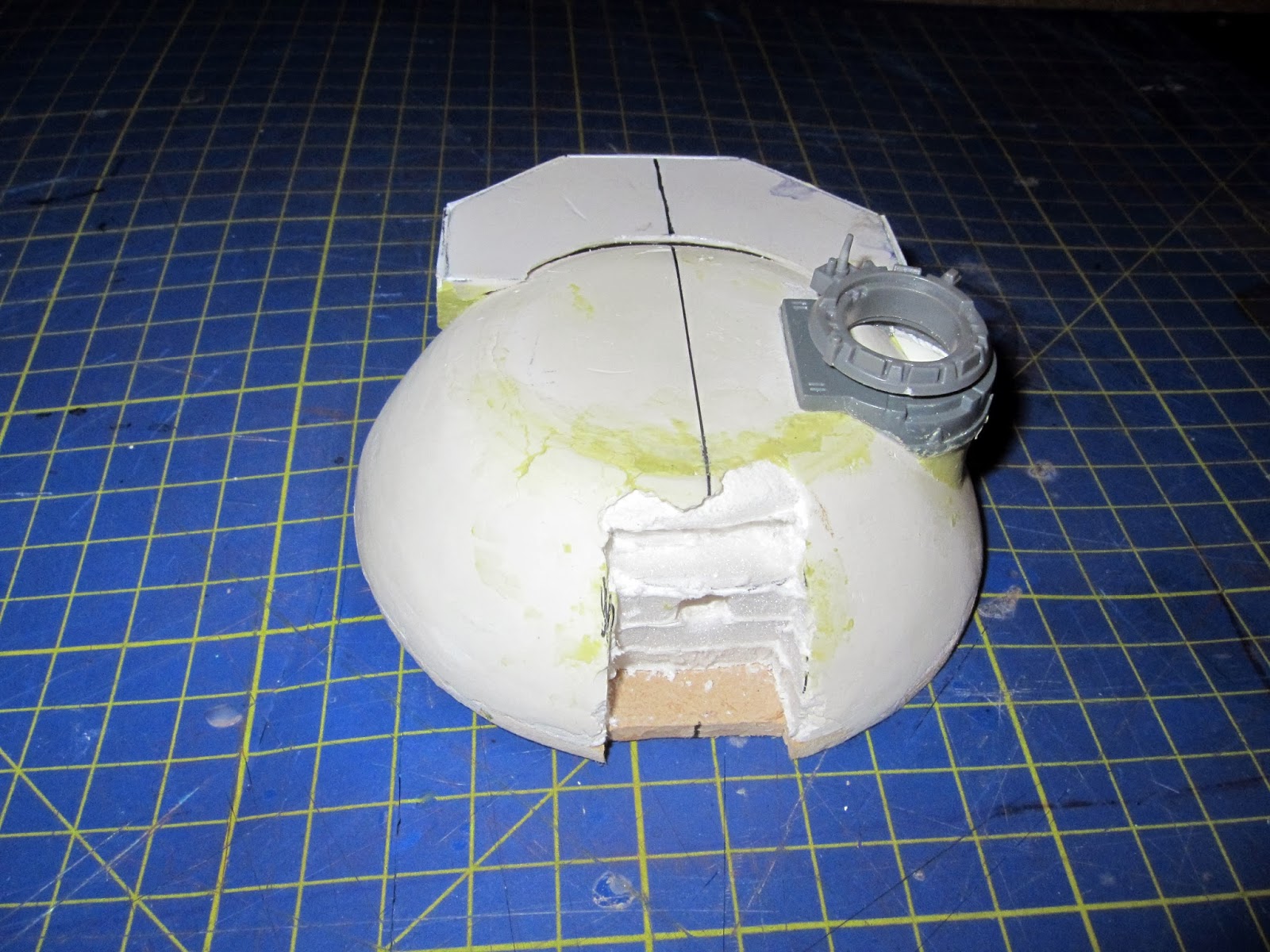 The Turret has been created using 3mm MDF board topped with 4 layers of 5mm foam board each one cut in decreasing sized circles and then covered in my secret ingredient???? "Ultra fine wall filler" its quick trying and easy to sand. A well placed cut piece of 25mm tubing glued on the side and there we have it, one symmetrical turret, well nearly.

Posted by Bluewarp Studios at 23:50 No comments:

Can you tell what it is yet?

With Throne of Skulls right around the corner I got a lot painting to do, but I have finally finished my Scratch built Chaos Shadowsword  that's had a bit of fun with a Fellblade and is legal in 40k Apocalypse. 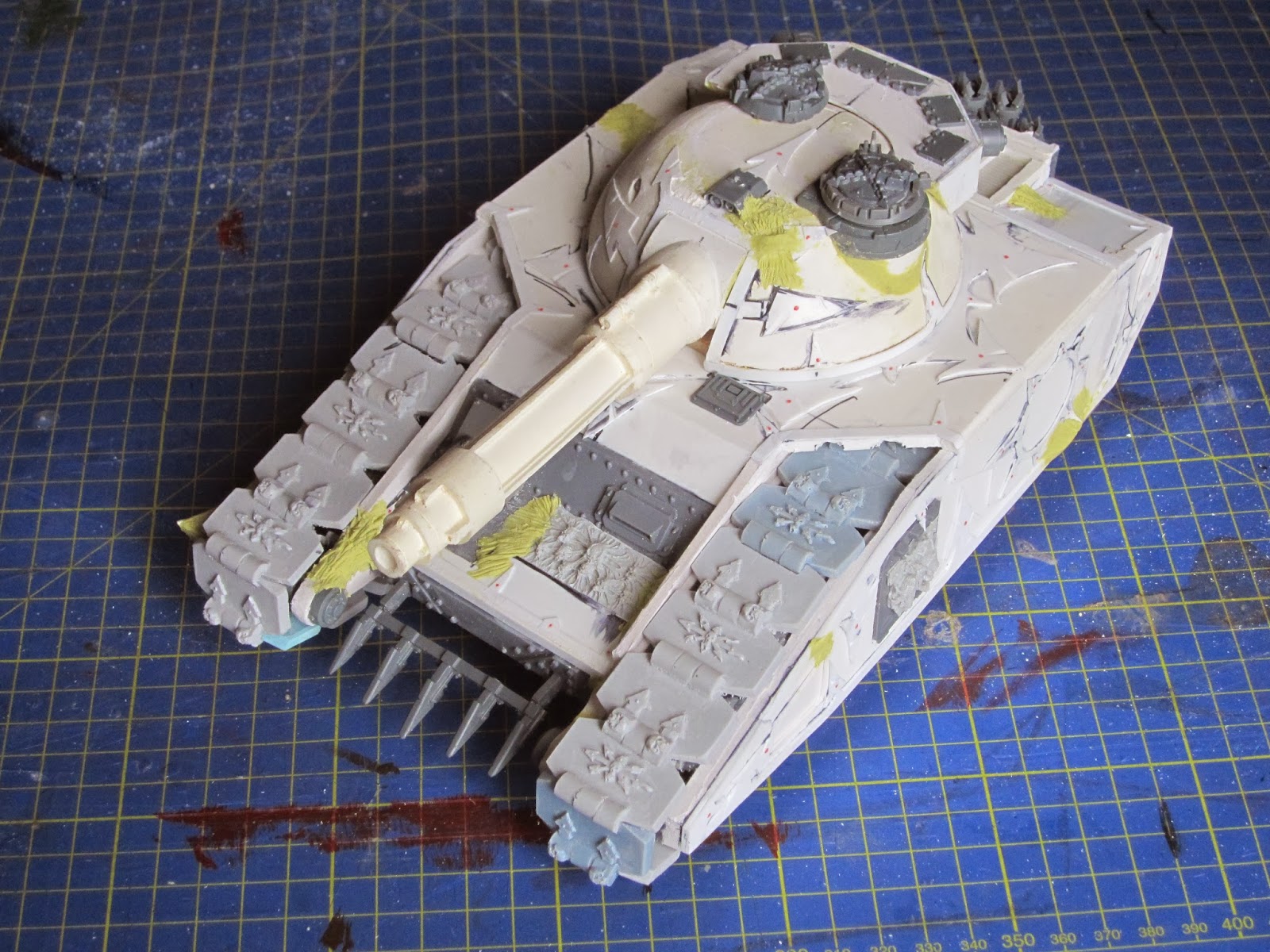 Posted by Bluewarp Studios at 22:29 No comments: