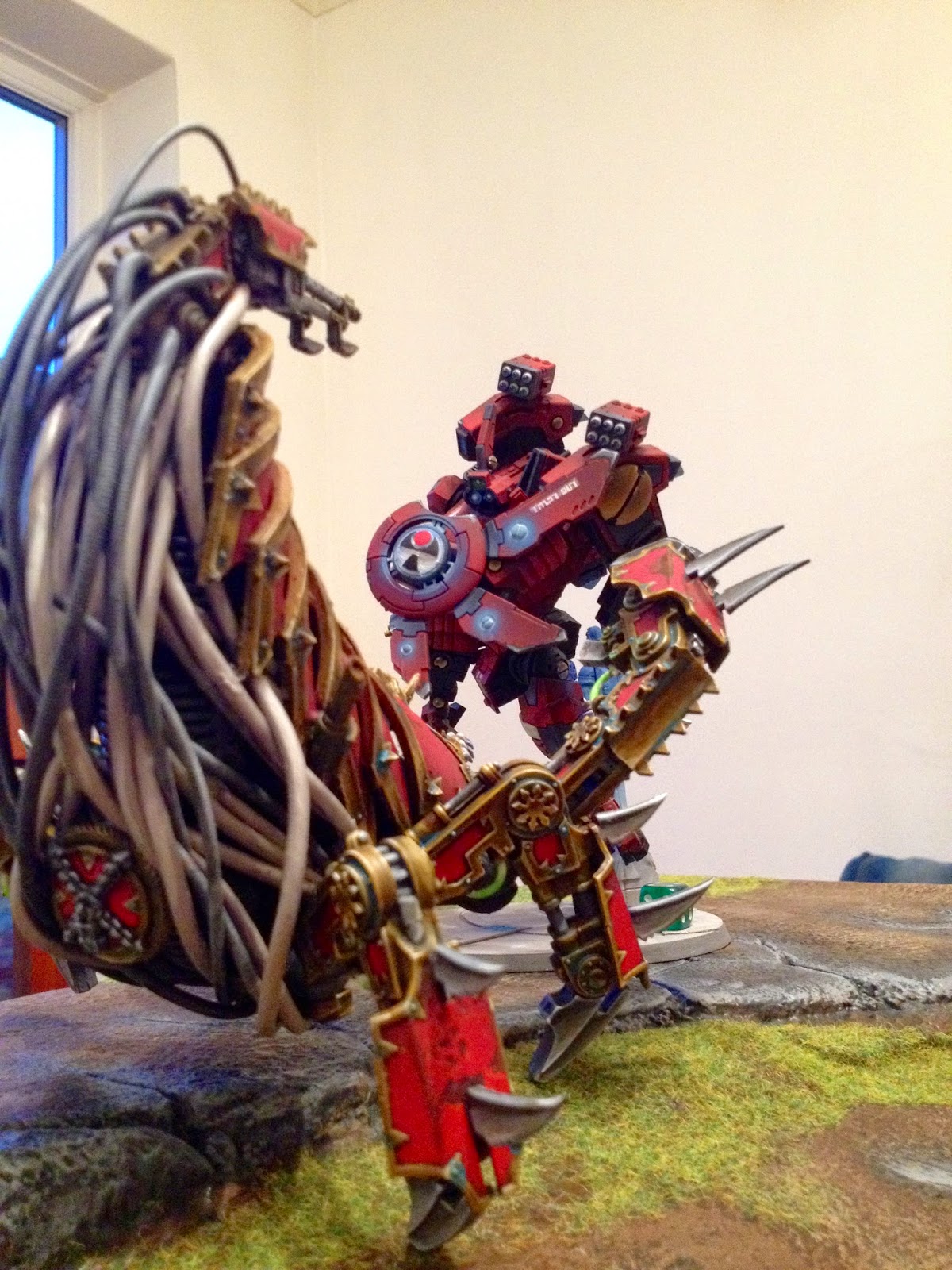 Hi all and welcome to our Easter holiday battle report, were I teach my seven year old son how to play 40K while my wife is away.  Sam choose my Khorne army and I choose Tau.  Sorry but the images are not great and my son insisted on pulling funny faces. 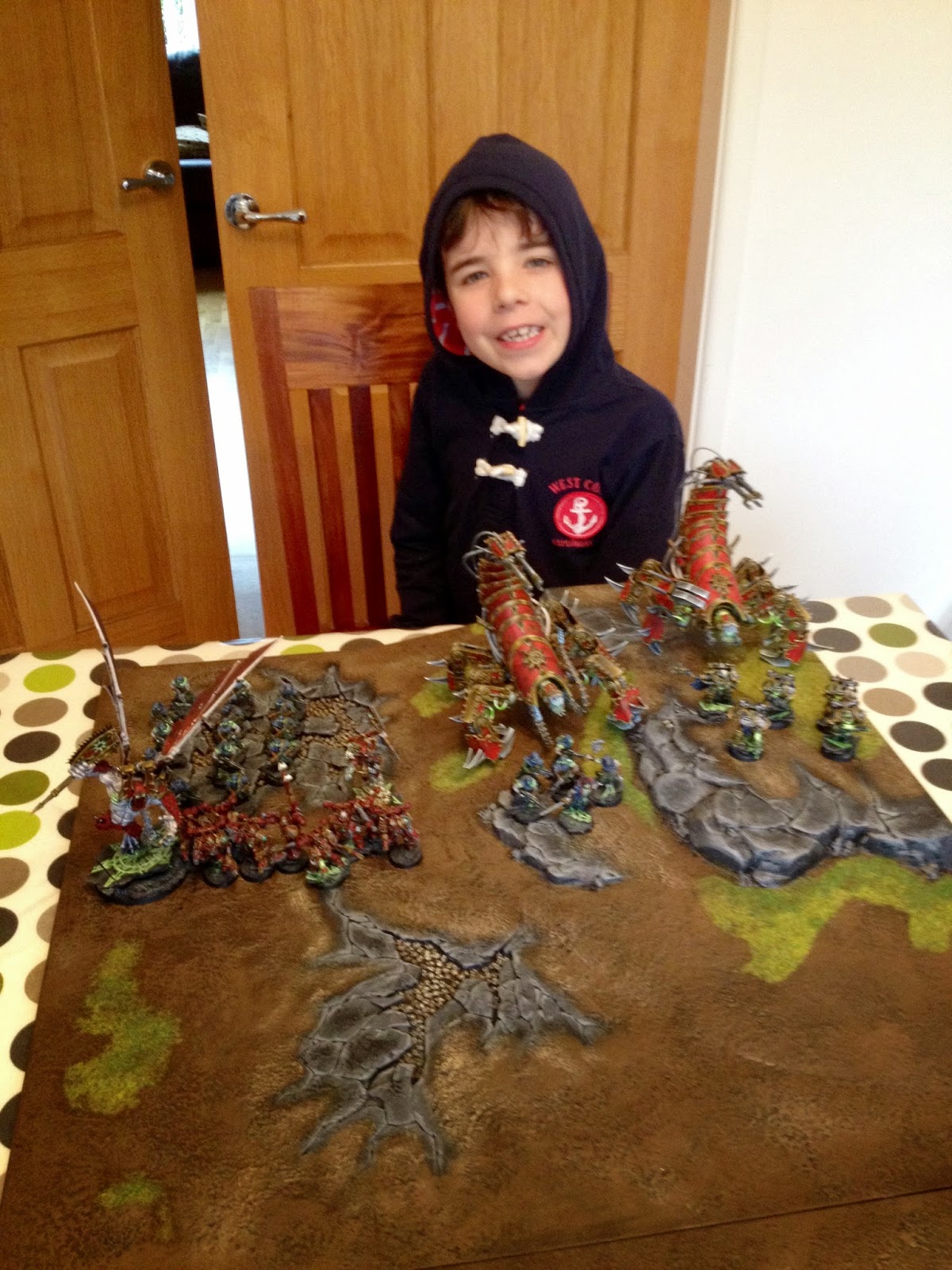 This is my Son Sam (looking normal apart from being a hoodie) and his 1300pts of Khorne which includes:- Kharn the Betrayer, 9 Berzerkers, 5 Plague Marines, 20 Chaos cultists, Daemon Prince and 2 Defilers. 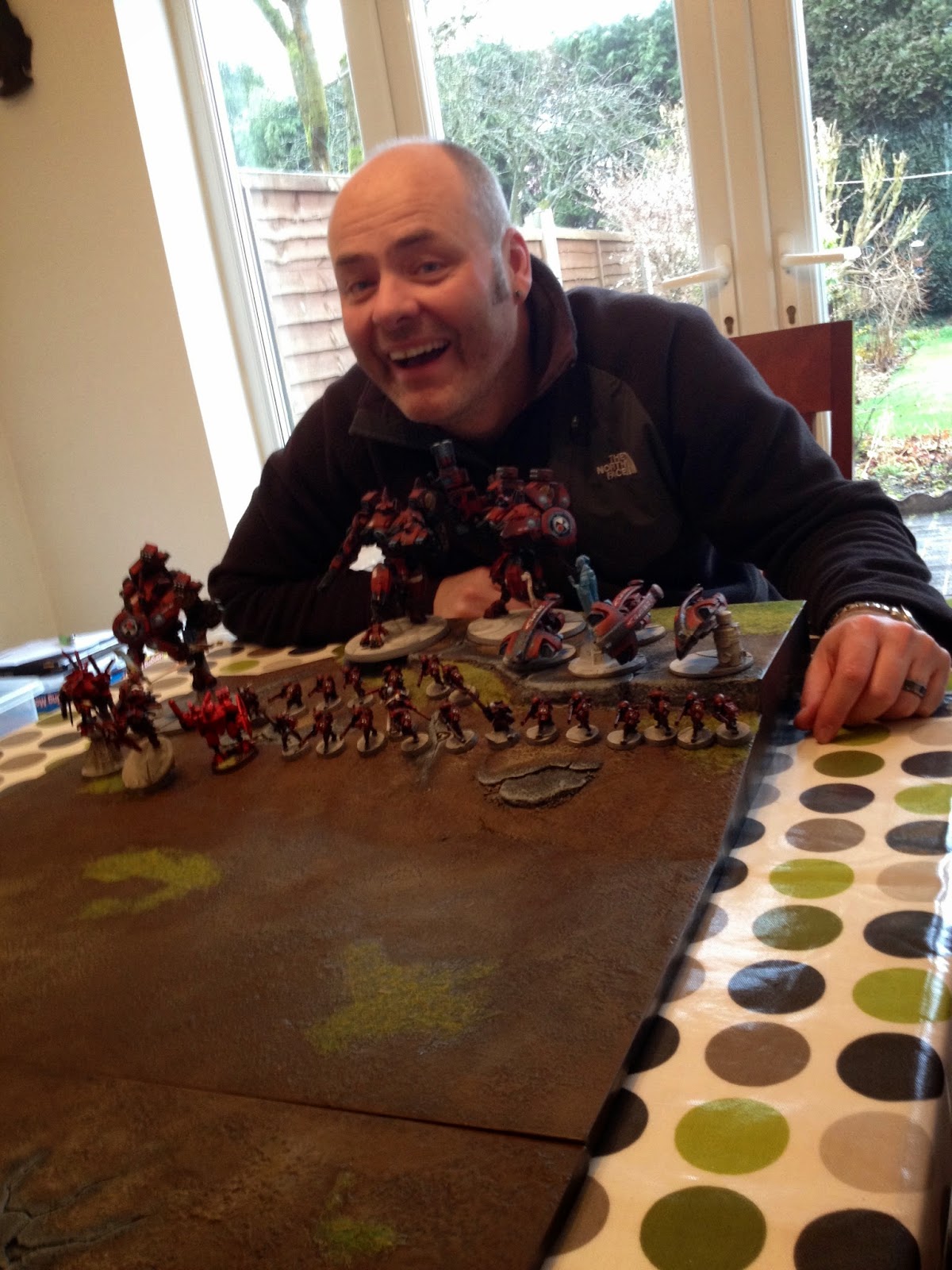 This is me and my Tau army which includes:- Commander Farsight and two Crises suited body guards, Cadre Fireblade and 12 Fire warriors, 8 Fire Warriors, 4 Tetras and 3 Riptides.

Standard set up on a small 2' x 4' board with Purge the Alien.  Let battle commence. 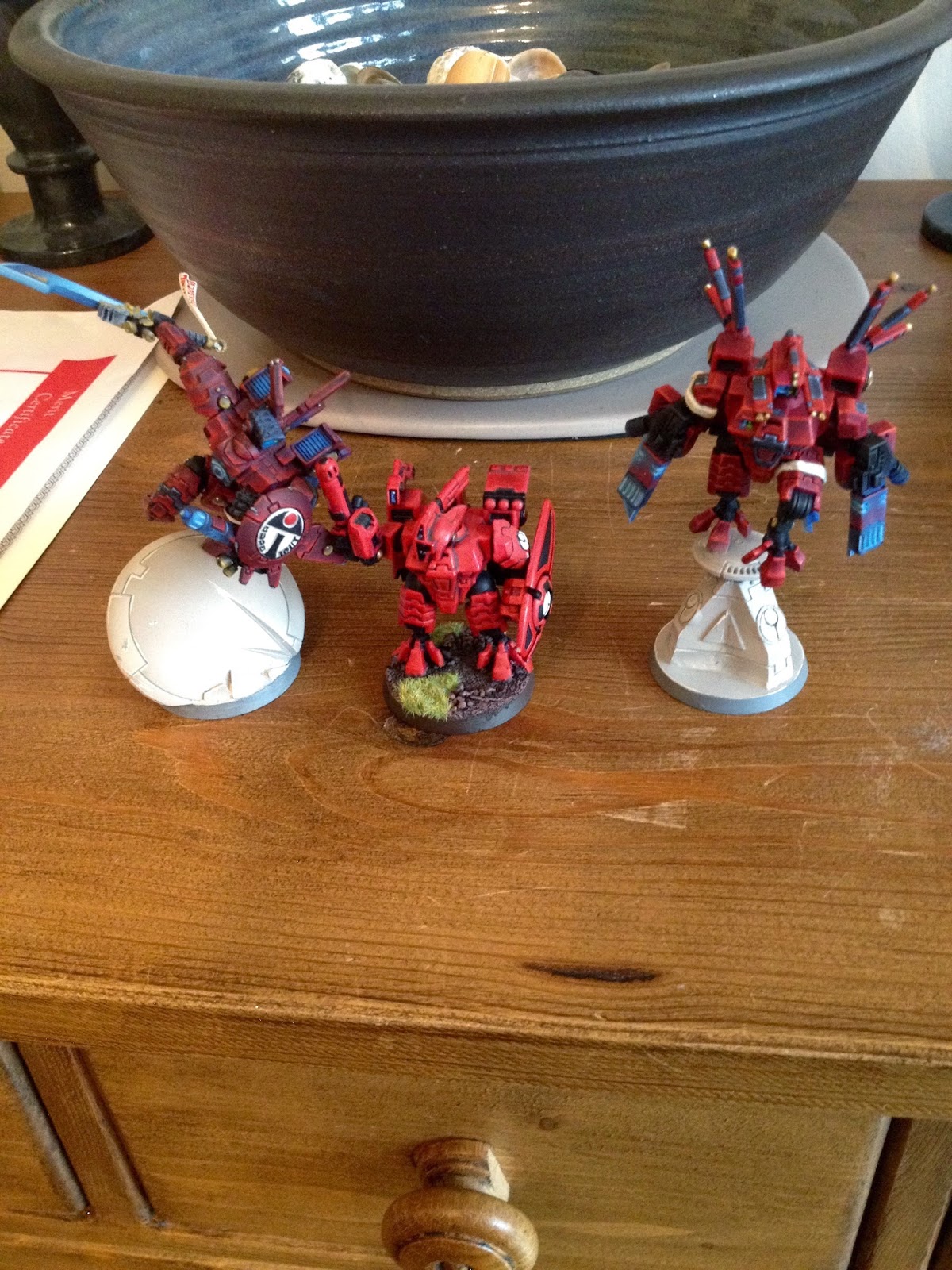 Sam won first turn moved everything forward and first to shoot was a Defiler and Sam decided to annihilate Commander Farsight.  Luckily he did just that with his first shot, also killing both body guards and had two shots to spare...... Jammy so and so, I couldn't believe it.  He definitely doesn't have my luck :)  First blood and slay the Warlord both go to Sam. 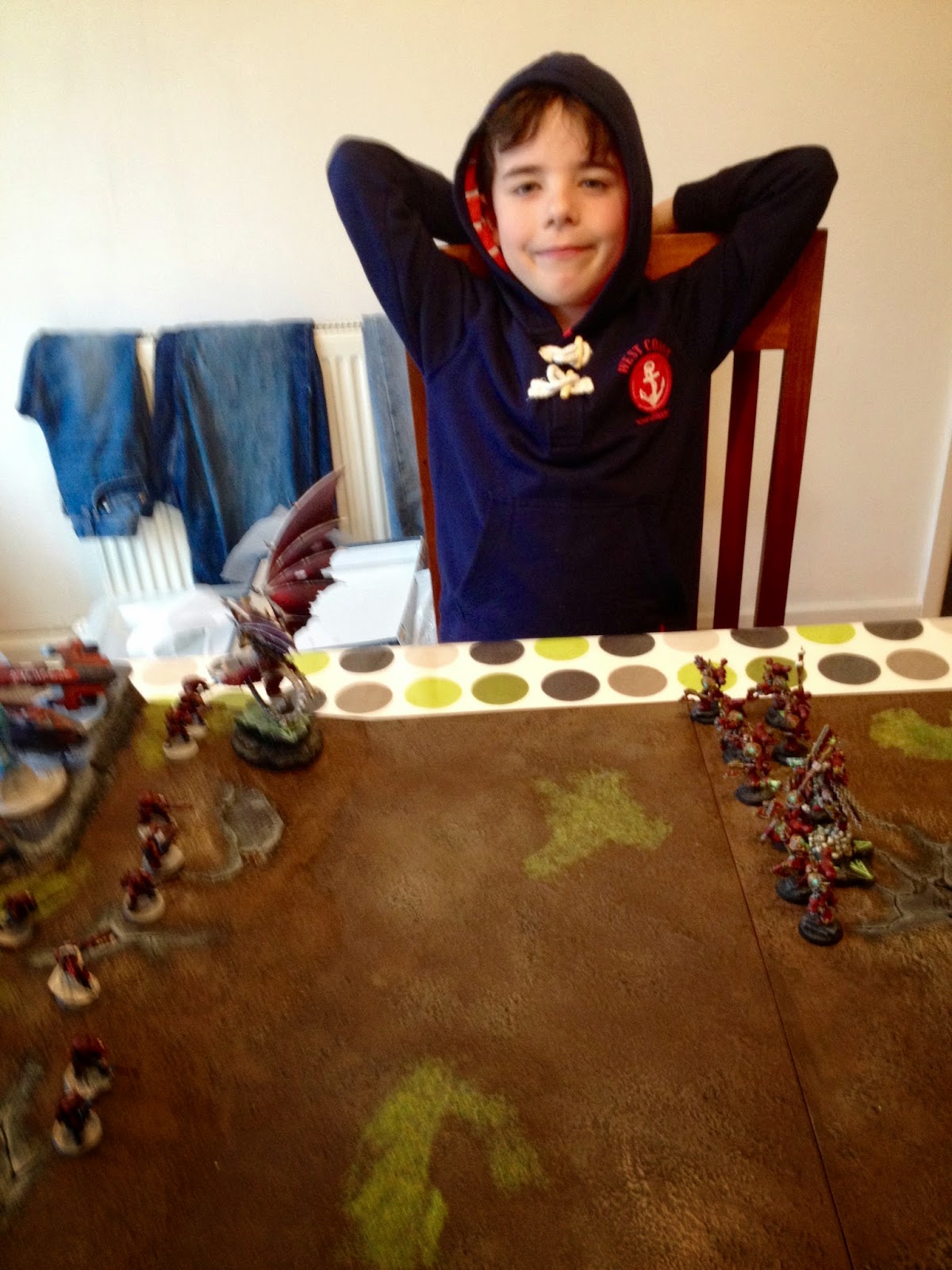 Sam looking a bit smug...... On my turn one, I shot everything at one Defiler and the Berzerkers and I only managed doing two wounds on each, not a great turn. 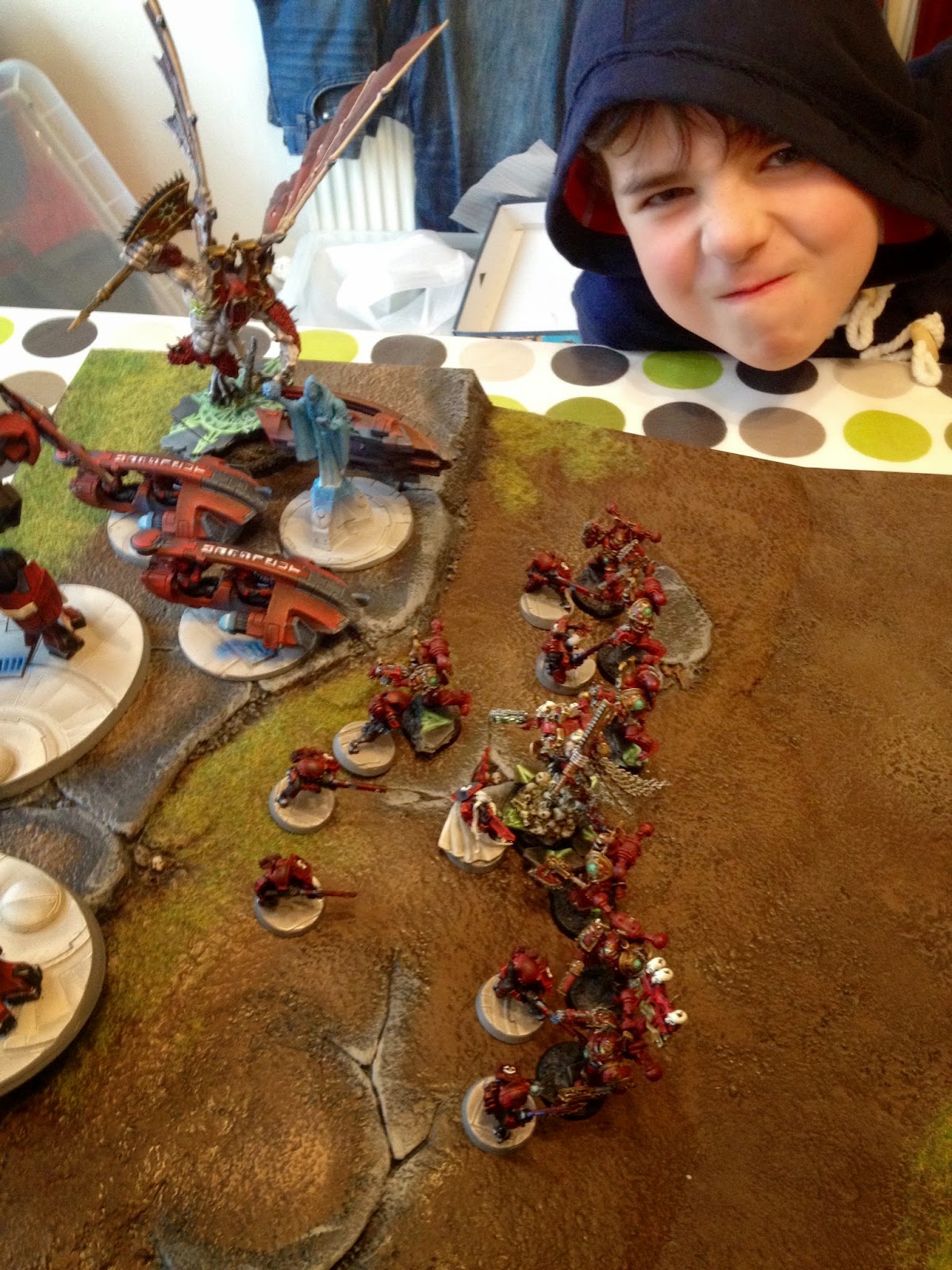 Sam's turn 2, the Daemon Prince assaulted the Tetras and Kharn's unit assaulted the both units of Fire warriors, with little or no resistance from me.  having said that though, I did forget to fire overwatch from both Riptides :( 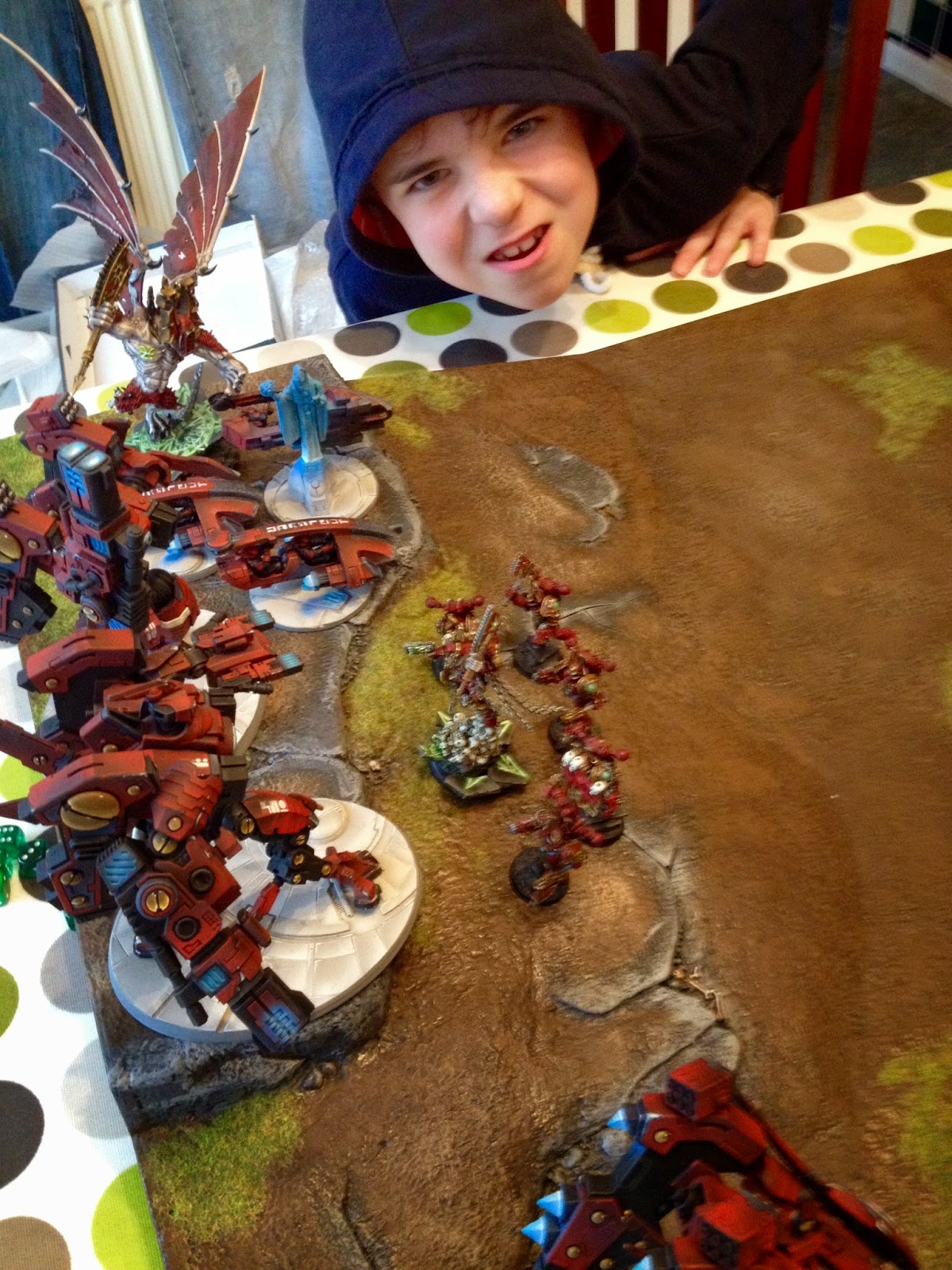 As expected the Fire warriors didn't last long and the Daemon Prince was unlucky and only killed 1 Tetra.   My turn 2, I did another wound on the Defiler, leaving it with only one wound left, the Tetras made a dart for freedom and the Two Riptides that forgot to fire over watch made sort work of Kharn and his Berzerkers.  With a Daemon Prince on my back line and two Defilers breathing down my neck this was going to be a short game :) 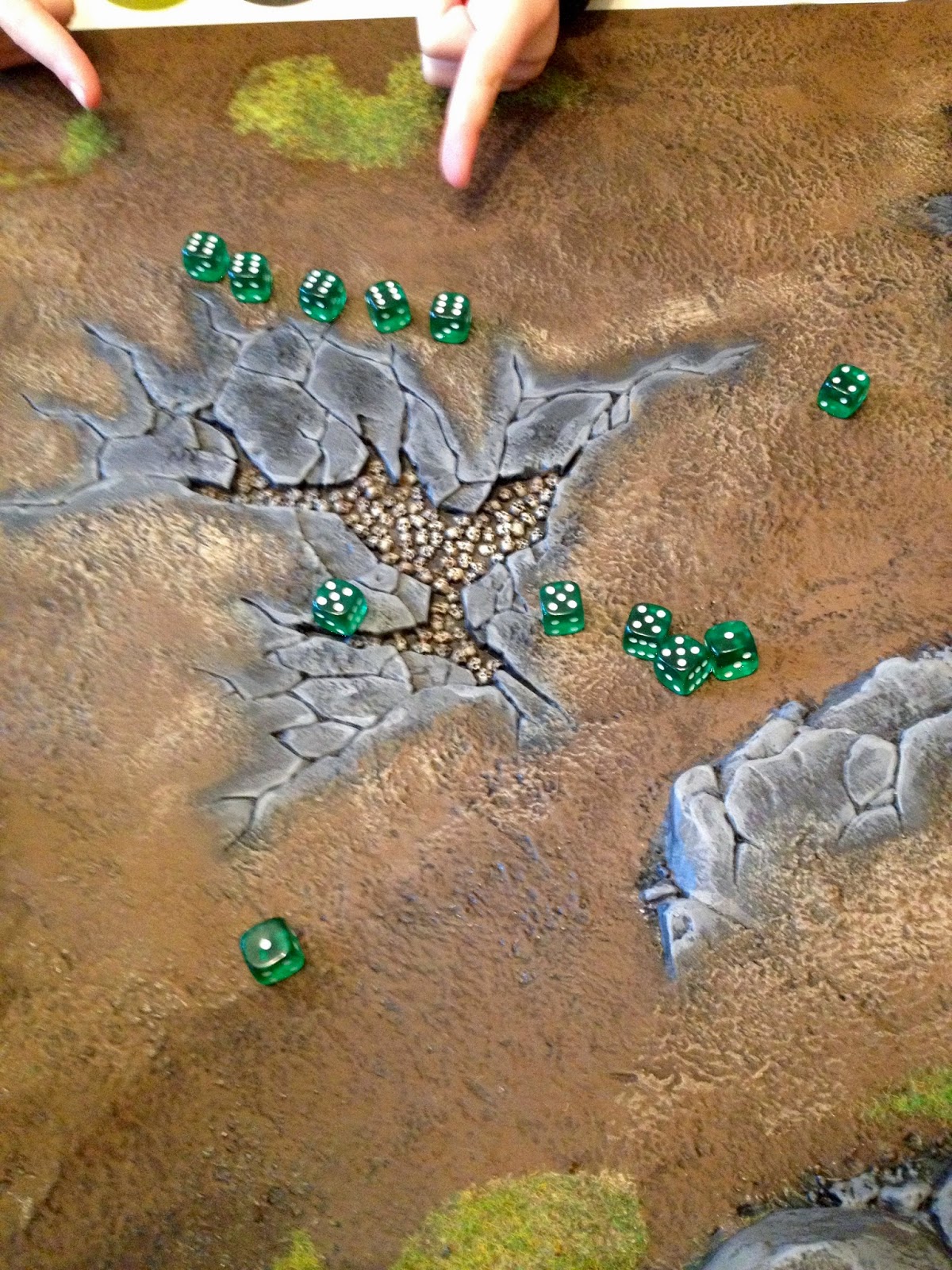 Sam's turn 3, and his first shot was to shoot the Riptides with 20 Chaos Cultists hitting 12 times and remarkably wounding 5 times, I also failed to save 2 out of the 5 rolling double 1 :( 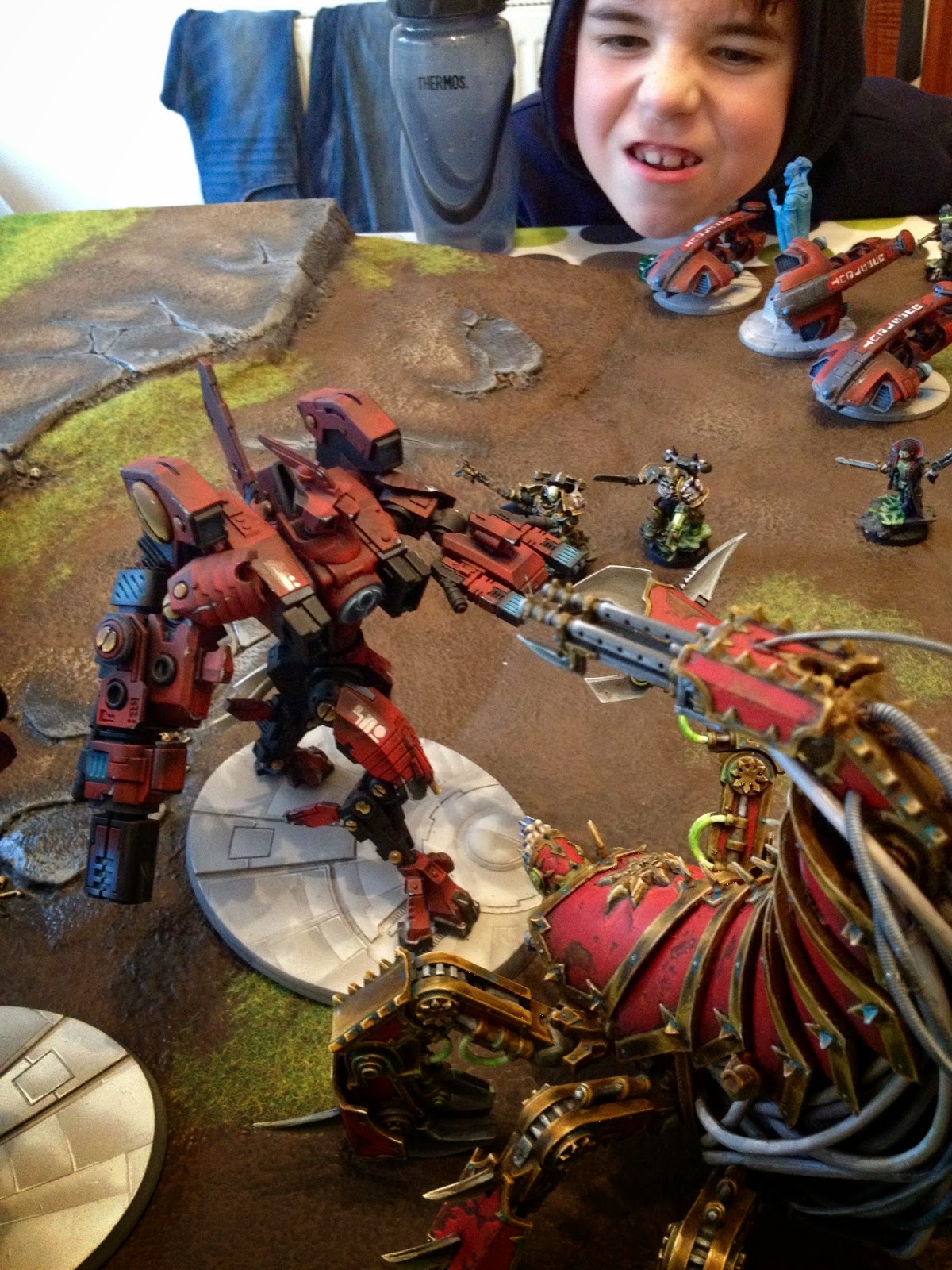 On my turn 3, I had left my Riptide with a fusion blaster, within easy charge range hoping to kill it with overwatch fire, but the dice gods were against me and my son saved the only shot that hit and wounded, that shot was all I needed to kill it. 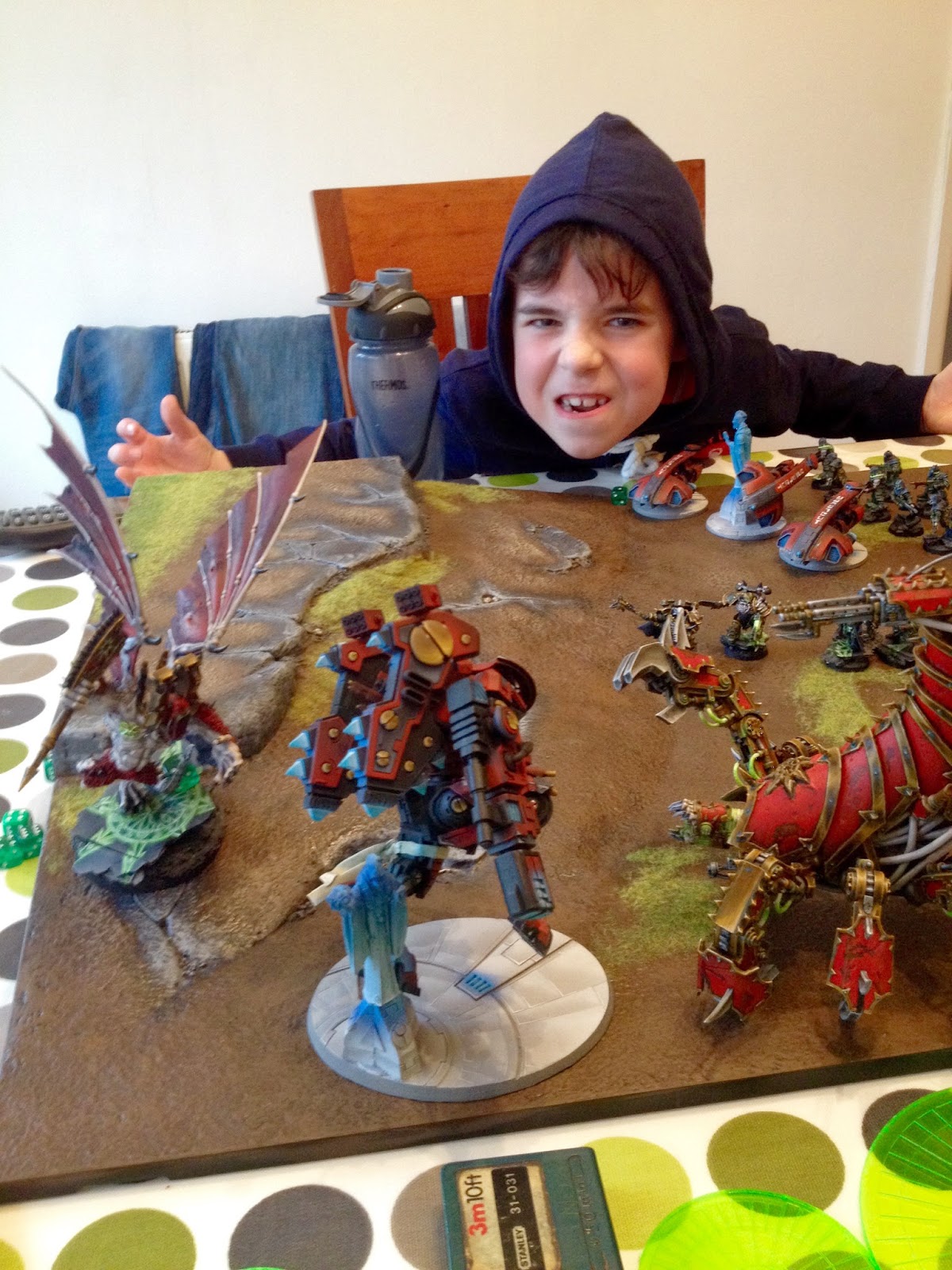 Turn 4, Sam charged the Defiler and killed the Riptide with the Fusion blaster and the Daemon Prince charged and killed the other Riptide but took a couple of wounds from overwatch in the process.  My turn 4 and the last Riptide took aim with help from the Tetras and killed the Daemon prince in it's tracks.

Turn 5 and it was looking a bit grim for me, Defiler one with the one wound remaining, charged my last Riptide and Defiler two charged the three Tetras, with 2 Plague marines and 20 Chaos cultists watching and cheering them on.  Defiler Two completely wiped out the Tetra squadron but Defiler one couldn't kill the Riptide and I had a chance to get my revenge with a smash attack, but the dice gods were with my son again and he made his daemonic save of 5+ and obliterated me on my turn 5. 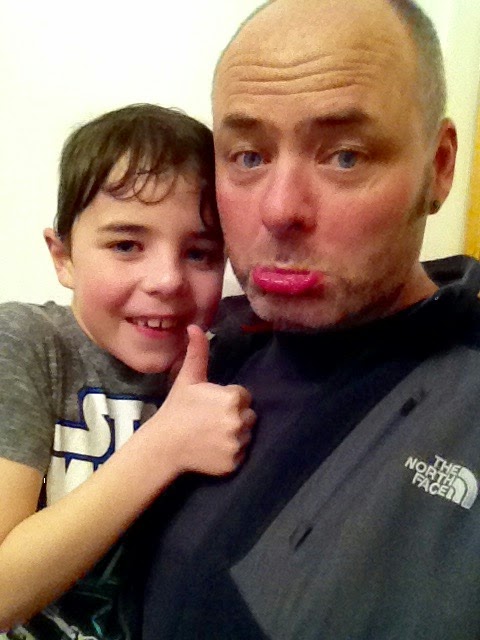 Sam had such a good time, the next day we played again but swapped sides to see if the Tau were unmatched against Chaos.  But guess what? he beat me again................


Posted by Bluewarp Studios at 17:24 No comments:

No matter how good you think you are, there's always someone better 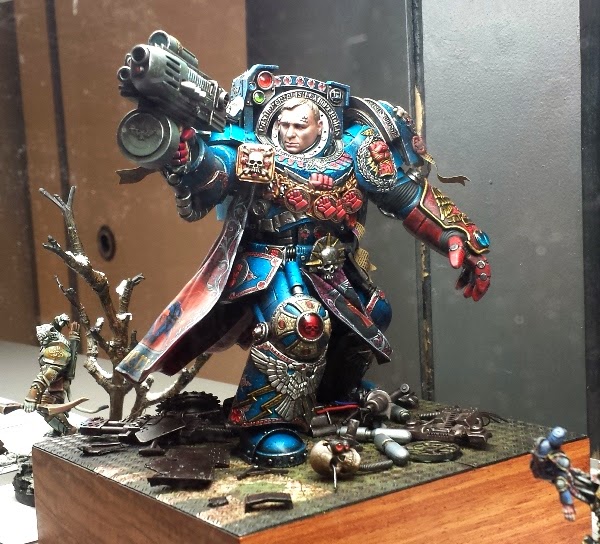 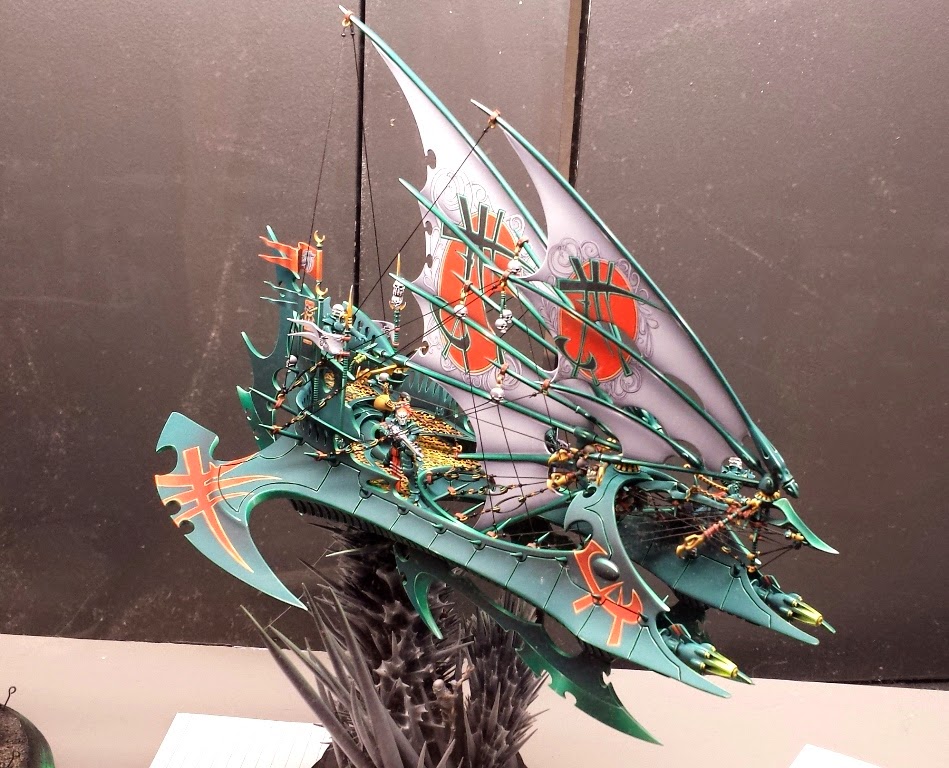 Posted by Bluewarp Studios at 13:00 No comments: 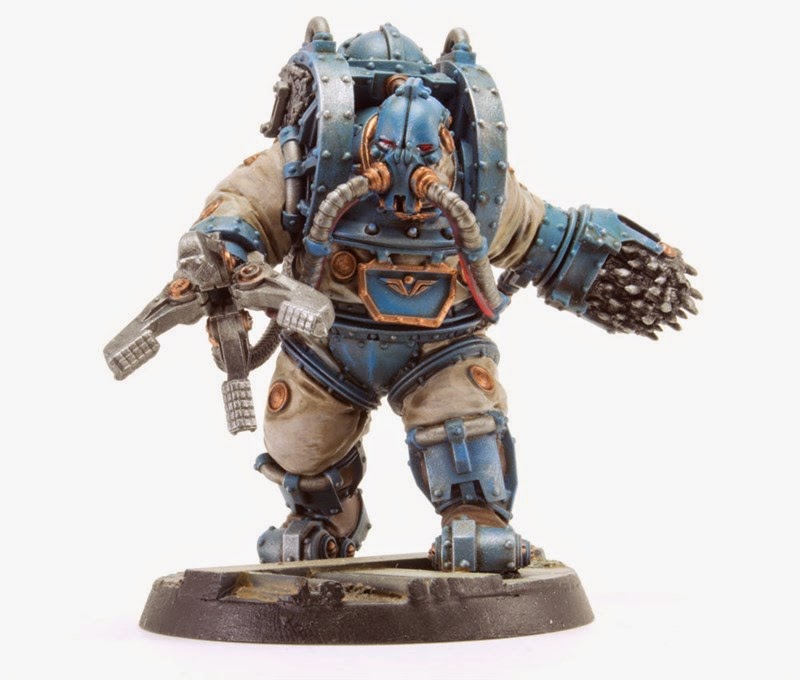 Forge World are at it again they are determined to get me either divorced or bankrupt.... Probably both actually :) 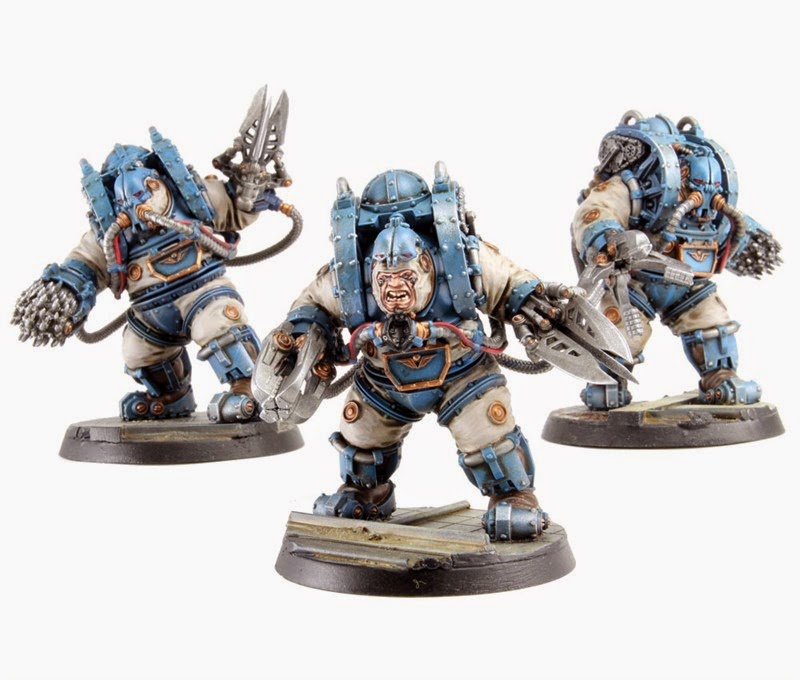 Posted by Bluewarp Studios at 11:19 No comments: