Thought for the day; has Milliput gone the way of the Dodo?  For us oldies and before Green stuff and Grey stuff the only modelling medium we had was Milliput, which was actually introduced to me via White Dwarf's metal, an article on how to plug the gaps on big metal miniatures, issue 91 July 1987 I think? Since then and mainly as a teenager, I used copious amounts of the stuff and it was always imbedded under my nails.  I have to admit I haven't used Milliput for some time, although having said that I used White Milliput to plug gaps on my Hellfly conversion. I purchased standard yellow grey from my local hobby store for £2.99 and for as Long as I can remember it's always been sold for around that price! The smell and texture brought back many memories and not to mention the way it sticks to your figures and all your tools, but it was fun non the less.

I used Milliput because I knew I wanted to create maggoty worm monsters for my Nurgle army, as Chaos Spawns. Does anybody remember "Tremors"?  I also knew I wanted to carve into the main form rather then sculpt from scratch, also saving me a small fortune by not using Green stuff.  This is just a WIP shot I intend on placing spines along it's body like a borrowing grub and spot the Kharibdyss heads from the Dark Elf war Hydra kit.

So in conclusion, No Milliput is not dead as a modelling medium, I for one has rekindled my love for Milliput, it does have its uses and I'll be using it again very soon.

Posted by Bluewarp Studios at 16:17 No comments:

Finished painting more stuff for my Throne of Skulls army and we have purchased our tickets today woohoo, bring it on :) 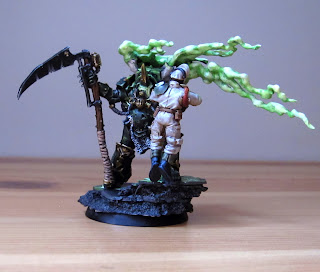 Second my two Hellflies which are not having much luck recently, they have been shot down 3 times in 3 games and has cost me all three games :( 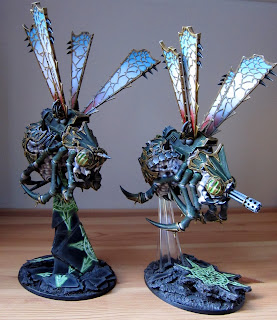 And third my lucky possessed Landraider 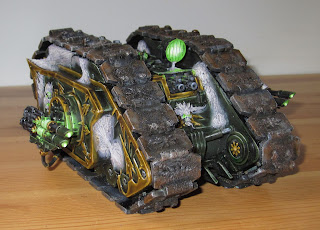